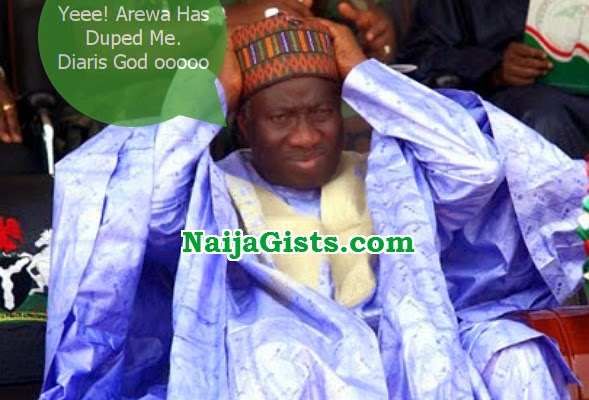 Arewa Impostors Duped Jonathan At The State House In Lagos

Yesterday Kano State Governor Rabiu Kwankwaso visited Lagos. He was welcomed by hundreds of Arewa leaders who claimed they rejected thousands of dollars offered to them by President Jonathan during his visit to Lagos two weeks ago.

The Hausa Emirs from 20 LGA and 37 LCDA debunked the rumour that they endorsed Jonathan.

Speaking at a meeting that held at APC leader, Bola Tinubu’s home in Ikoyi, the leader of Arewa community in Lagos, Alhaji Sani Kabiru said those that endorsed Jonathan were impostors who bought turbans at Agege and went to visit Jonathan at the State House, posing as emirs only to deceive the President.

He said, “When President Jonathan came to Lagos with dollars, some of us here quickly went back and gathered ourselves and started calling our own not to go to visit Jonathan. I also commend some leaders here for leading an offensive and convinced people not to go there.

“Most of the Arewa leaders and ‘serikis’ did not even go there to collect the dollars. At that event, card-carrying members of the Peoples Democratic Party bought turbans at the Central Market around Moshalashi Bus Stop, Agege. The person that sold the turbans told me that they dressed up as emirs and they were on their way to Jonathan’s place.

“So, most of them were fake. They went to collect dollars but cannot tell anyone because they are in hiding. But we did not stop at that; those that we knew that went, we called them to order and asked them why they went but they said they only collected dollars but they would not vote Jonathan.”