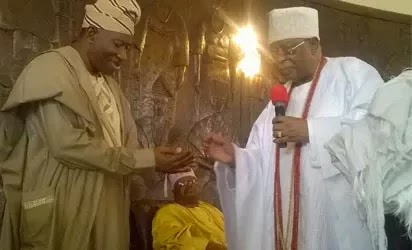 As you are all aware that Jonathan has been moving from town to town soliciting for endorsement as March 28 election date moves closer.

His latest show of shame happened in Ijebu last week during a meeting he had with highly respected monarch, Oba Sikiru Adetona, the Awujale of Ijebuland.

Fillers at the event alleged that Jonathan had earlier sent a wealthy businessman to Awujale to tell him how he wants the meeting to go but the monarch reportedly rejected the offer.

This is how PM news is reporting what went down at the palace last week.

More details have emerged on why Awujale of Ijebuland, Oba Sikiru Adetona and other Ijebu monarchs failed to take group photograph with President Goodluck Ebele Jonathan when he paid a courtesy visit last Thursday.

With South Western Nigeria votes said to be crucial in deciding the winner of the election, President Jonathan has been meeting many groups, including visiting the monarchs in their palaces. Indeed, President Jonathan has virtually relocated to the South-West since the Independent National Electoral Commission, INEC, postponed the general elections from 14 February to 28 March.

On February 21, President Jonathan, after inaugurating the Olorunsogo Power Plant 2, at Papalanto in Ewekoro local government area of Ogun State, held a private meeting with some prominent traditional rulers in the State.

Also, three weeks ago, the President moved to Oyo to visit the Alaafin, Oba Lamidi Adeyemi and the Soun of Ogbomoso, Oba Oladunni Ajagungbade in their respective palaces.

On March 7, the President visited the Ooni of Ife, Oba Okunade Sijuwade, in Ile-Ife, Osun State to seek the support of the monarch and other Osun monarchs for his re-election.

Apart from the Ooni, the Orangun of Oke-Ile, Oba Adedokun Abolarin, the Owamiran of Esa Oke, Oba Oba Adeyemi Adeniran, the Olufi of Gbongan, Oba Adetoyese Oyeniyi, Alowa of Ilowa, Oba Bukola Ali, the Olojudo of Ido- Osun, who is the Secretary, Board of Trustees,BoT National Council of Traditional Rulers in Nigeria, Oba Adedapo Aderemi and other monarchs from the entire Ile-Ife region were at the palace to receive the President.

The President, thereafter, went to Ilesa, where he also met with the Owa Obokun and Paramount ruler of Ijesaland, Oba Adekunle Aromolaran. Traditional rulers from Ijesaland were also present at the Owa’s palace to receive the President.

In Ekiti State, a similar scenario was reported to have played out.
President Jonathan met Ekiti monarchs when he visited the State for the PDP campaign in January and about 50 traditional rulers were present at the meeting and the President took time to shake hands with all of them.

Last week Thursday, President Goodluck Jonathan returned to Ogun State and paid a visit to the Awujale in his palace at Ijebu Ode, with the expectation of that the respected monarch would endorse him as it was done for him at Ile-Ife, Osun State.

We can exclusively report that the Presidency has remained unsettled since the visit as it was shocked with the reception at the palace.

The Awujale’s address was read by the Dagburewe of Idowa,Oba Y.A. Adekoya, who in an introduction told Jonathan: “Your Excellency,the man you are sitting with now,our own Awujale and Paramount ruler of Ijebuland, Oba Sikiru Kayode Adetona is 81 years old and he has spent 55years on the throne.The man is wearing gold and you know that gold does not rust.” The introduction was greeted with applause by other chiefs and monarchs present.

Our correspondent also learnt that the Presidential protocol officers tried to rush the MC, who is one of the Otunbas, but the compere bluntly told them,”I am acting on the directives of the Awujale and nobody can give another order. That is our tradition here, we don’t rush.”
Cross section of traditional rulers, community leaders and chiefs during President Jonathan’s visit to the Awujale’s palace in Ijebu Ode

Later the Master of Ceremony invited the Obiri of Aiyepe to introduce all the members of the Ijebu Traditional Council.

To the admiration of all the people in attendance,the monarch stood up and introduced all the monarchs, numbering about 45, as they sat off-hand.

As the event was about rounding up,the Master of Ceremony announced that all the monarchs should move outside to the palace terrace for a group photograph with the President.

The atmosphere at the Lions Hall,venue of the meeting inside the Awujale palace, instantly changed as most of the monarchs declined to go while those who had intended to go for the picture,having read the body language of others,who are mainly old horses,had to retrace their steps. The photo session was called off as the President hurriedly left the palace.

The show signalled serious disappointment and embarrassment to the President, as the protocol hurriedly ‘packed’ the number One citizen to his vehicle and zoomed out of the palace to catch up with another appointment at the Nigerian Stock Exchange,NSE in Lagos.

One of the highly respected monarchs in Ijebuland,who was part of the meeting confided in P.M.News that they are not hungry monarchs who could easily be bought over with the President’s dollar.

The royal father revealed that the President had before the visit sent an emissary to the Paramount ruler to discuss how he would like the meeting to go, the development that really pained Awujale. He was said to have warned the emissary.

“One of the prominent Ijebu businessman,whose name I don’t want to mention had been sent to Awujale by the President to speak with him on how he would want the meeting to go and also to get an endorsement from him, believing that Awujale is a strong factor that can add weight to his ambition at the poll.

“This man met with Awujale on Wednesday,a day before the visit but Awujale angrily expressed his reservation to the middleman.A blunt and straight forward monarch,he told the man,whom he so loved, that he will never be part of such arrangement and warned him never to do such as he was quoted to have told him,”how many President have you ever hosted in your life,even,with your riches and wealth?Are you now the one to teach me on how I should host the President or you think I am a stereotype or robot King. Never let such thing happen again, or else,you will not like what will happen next,” the monarch was quoted to have told the President’s emissary.

Commenting on why they refused to take group photograph with Mr President,the monarch queried: “Why the noise about group photograph? Haven’t they got enough pictures during the meeting,after all, they took several pictures? Are those not enough? So, what is so special or important about this group photograph?

“You can see how the picture taken at the Ooni’s palace went viral on the social media. Is that the kind of thing our own picture will turn to?. Awujale is not like that, he is an institution of integrity ,an authority and a symbol of culture and tradition. We respect our tradition and nothing should be done to soil it. If A has done something,does that mean that B too must do it?

“Awujale has spoken our minds,we don’t campaign for any politician and President Jonathan is not exempted. Is he a different person,are they not all the same. So, we have resolved to maintain our dignity and integrity. We are fathers to all, we should not be seen as playing partisan politics and that was what we have demonstrated,” the royal father said.

Another monarch,who is from Odogbolu local government expressed dissatisfaction with some of the utterances of both the President and some of his aides during the meeting.

The monarch, who pleaded anonymity exclusively revealed that the President either deliberately or tactically ignored some of their requests and was saying other things.

The PDP Chairman,Alhaji Adamu Muazu, had annoyed the monarchs and chiefs when he described the Ijebu people as stingy people.

He was angrily corrected by Awujale,who said,”we are not stingy, but prudent in our spending.”

Even,when Muazu insisted that the Jonathan train would not leave until it received the Awujale blessing, it was clear that his hosts were not happy with him over such embarrassing statement.

“We were worried when the President was reacting to the requests and address of Alayeluwa, Oba Awujale. In his address,he mentioned like four to five things and when the President wanted to react,he just flipped through them and was saying that he did road, railway,agriculture,so,if re elected,he will do more. ‘A n wi’ri,o nwi’ru’.(meaning,we are saying this, he is saying another thing).

“Awujale spoke about not feeling the federal presence in Ijebuland, resuscitating the moribund Iwopin paper mill, actualising Ijebu State, reimbursing Governor Amosun on the cost of construction of the Mobalufon flyover. We should have risen above partisan politics. That bridge is a landmark not for Ogun people alone but Nigerians as a whole. But instead of direct response,he was making political statement,forgetting that he is not at a campaign ground,”he revealed.

A Presidency source confirmed to our correspondent that the President’s team are now regretting their visitation to Ijebu Ode, especially, after the media backlash.

The source disclosed that during the analysis of the visit, one of the party leaders from the southwest,who was in the entourage said,”we would have gotten the endorsement if not for the stupid statement of the Chairman. Why should he be saying that Ijebus are stingy in front of their Obas, that’s too bad.

A palace source also informed our correspondent that Awujale,since last Thursday visit of the President, has received over 500 text messages congratulating and commending him and other Ijebu monarchs for their actions.
The messages according to the source, are still pouring in.

Eyah!!! this Jonathan is over working himself. Nigerians make una pity him oooo iiiiish