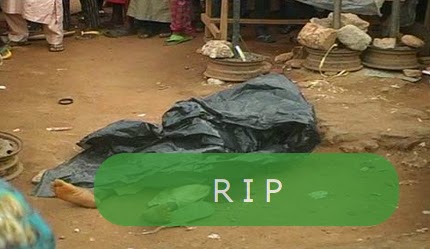 A married man died on Monday night at the house of his mistress.

According to area residents, the deceased identified as Osayande Edoigiawerie, was allegedly stabbed to death by his lover’s son at Zabayor Street.

The deceased, who was alleged to have gone to his lover to take his dinner, was attacked with a dagger by the son of the woman while the food was being served.

The assailant, who is now at large was said to have stabbed the man severally all over the body, leading to excessive bleeding.

The deceased’s lover raised an alarm, which attracted the people in the area to the scene. They thereafter rushed Edoigiawerie to a nearby clinic where he was confirmed dead.

The wife of the deceased said she had been alerted by some neighbours about a fight between her late husband and the assailant, but found him dead when she arrived at the scene.

“When I rushed to the scene, I saw him on the road; all his intestines were on the ground. When I asked, they said that his girlfriend’s son stabbed him.

“So, I took him to a hospital. But after everything, he died. When we got to the woman’s house, we found that it was empty; they had run away,” Mrs. Osayande said.

The reason for the murder still remains a mystery.