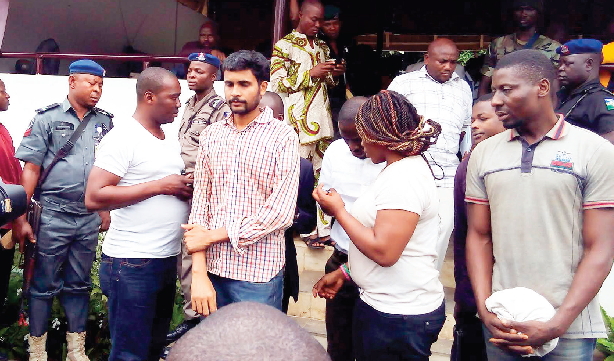 He told Taiwo Abiodun the story of his commando-like rescue and how he was rescued along with the kidnapped Akungba regent.

When The Nation met the young student Kehinde Todeh at home in Imoru town, Ondo State, the house was filled to the brim with visitors; friends and well-wishers, who had come to rejoice with his parents on his joyful escape and return from the den of kidnappers.

Even in the comfort of his home, and with so many people around, Todeh still looked visibly shaken, starring intermittently at the sky, as if in a trance. He narrated how he was kidnapped and how soldiers rescued him. “I am a student of Federal Government College, Idoani, Ondo State. Last Tuesday, my father sent me to the farm with his labourer, a mallam, to show him where to work, so he would not work in a wrong place or beyond the boundary. On our way, at about 8.00 am, we suddenly began hearing gunshots and became afraid.

“Suddenly, we saw a man holding a gun, he shouted at us to stop and that if we attempt to run, he would shoot us. But rather than obey him, we took to our heels. The mallam ran away and the kidnapper ran after me, caught up with me and pinned me down. He grabbed my hands and started dragging me along in the bush. Finally we got to a place where we saw many people, whose hands were tied. I saw a white man, two other men, a Youth Corper and a woman, whom I later found-out was the regent of Akungba, who had been kidnapped for days.”

At a point we started hearing gun-shots. The shooting got closer and my kidnapper ran and climbed a tree.
We all became afraid, not knowing who the gunmen were. Later some soldiers showed up, but kept shooting. It got to a stage where my kidnapper who was on the tree top came down and jumped into the river. That was how he escaped.

When the soldiers saw us, they ordered us to raise up our hands and we obeyed. But since some of the hostages’ hands were tied, they could not raise up their hands. Thereafter, the soldiers untied them and set them free. They interrogated me, asking who I was and what I was doing there and I explained everything to them; how my father sent me on an errand with his labourer, how a man kidnapped me with a gun and dragged me to where they found me. After a while, the soldiers asked me to go home. That was how I regained my freedom.

On how he feels after his travails, the boy said ‘ I feel free, but I am still afraid. I didn’t know I could come back alive. I thank God.”

How they were rescued

Sources say a hunter who went on a hunting expedition overheard the victims’ cry and hurriedly went to Ifon Police Station, about 20 kilometres away to make a report. Immediately, the Joint Task Force of the Police, soldiers and other security arms went into action to rescue the hostages from Arimogija bush, where they had been held hostage. Reports say one of the kidnappers was gunned down while trying to seize a riffle from a soldier. Another confessed that their ring leader and herbalist who assisted in preparing charms for their operations lived in Arimogija Village. The security team stormed the village in the early hours of Tuesday, but the man escaped along with his wife. His house was however set ablaze along with his Volvo car and a motorcycle.

When this reporter visited the herbalist’s resident in Arimogija, one could still see the burnt building and the charred remains of the motorcycle and Volvo car, still emitting smoke. The neighbours refused to speak to the press, fearing police arrest. Some however expressed their disappointment, saying they never expected the man to be involved in such crime. “We never suspected that this old man could be involved in this type of job. How can we trust out neighbour again?” A neighbour said.
Another said, ‘We always suspected this man because we used to see big and expensive vehicles parked here (in front of his house) always, but we didn’t know the kind of job he does. I never knew such a wicked man lives in this vicinity.”

Reports say the suspect and his wife were able to escape by taking advantage of the atmosphere of confusion created by the soldiers who stormed the place, shooting sporadically.
Atmosphere of suspicion
As result of this revelation and shock that followed, everyone in the village now seems a suspect as no one seems to know who to trust. A day after, a young man was almost lynched for allegedly roaming aimlessly around the village. He was however released following his pleas of innocence and the fact that nothing incriminating was found on him.

One of the residents says they have become more vigilant for their own sake and safety. He added that “We receive a lot strange people here, we don’t know who is who, and now they have turned the village into a den of kidnappers. What this means is that we are not safe and we have to be proactive.”
The Nation also learnt that the village has not had a leader since 2008, when a controversy arose over who should be king.

Arimogija is an agrarian community in Osse Local Government of Ondo State. Although a rural setting, the village is somehow regarded as cosmopolitan because it leads to Ore, Akure, Benin, Abuja en-route several northern towns. Not many people could be seen during the day, but at night, it is like Ore where people do not sleep because of business activities. As a result, the place also harbours criminals and other people of questionable characters. The fact that the nearest police station is over 20 kilometres away in Ifon also makes matters worse.”

A resident also said the village does not have a single hospital and lacks several other amenities. He said that is why the crime rate there is high.
A woman who pleaded anonymity said some of these criminals would kidnap their victims and have their vehicles burnt to erase all traces. “There is a vehicle that was set ablaze and we suspect it was used in this nefarious business.”

Investigations also reveal that armed robbery incidents regularly occur in the area and that several herbalists in the village are on the criminals’ pay-roll preparing fortification charms for them.
Chief Olowojoba Julius from the village also testified to the level of crime, saying “The crime rate in this vicinity is getting higher and higher everyday just because we don’t have a leader here. Since 2008, we have not chosen a king and that is why lawlessness and crime are increasing. Not only that, as big as this community is, we do not have a police station.”

Parents of the kidnapped boy

The parents said they were surprised that their boy could be so kidnapped and gave thanks to God and the task force for helping to rescue him even before they learnt of it. The father Mr. Todeh, who is a secondary school teacher in the village, said “I was surprised to hear that my son was among the rescued ones. On that fateful Tuesday morning, I had sent Kehinde to go with my labourer to the farm to work; I never envisaged all these. But while I was in the class teaching, words came that my son was one of those rescued by the police and soldiers. The whole thing saddens me because the import is that one can no longer send his ward or son on a simple errand anymore.”

[Reported By Taiwo Abiodun, The Nation]