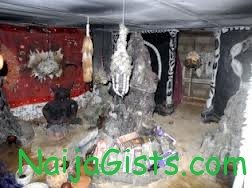 Oct 26, 2012 – How I Escaped From Bauchi Ritualists By Divine Intervention – Patience Bitrus

Call it a narrow escape or a close shave with death, you are not wrong in capturing the story of 25-year old Patience Bitrus who recently escaped from suspected ritualists in Bauchi State. naijagists.com

However, her co-traveller was not as lucky as Patience painted a gory picture of how she was slaughtered like a sacrificial ram by the evil men. Narrating her ordeal, Patience recalled that she watched with trepidation, how three men pinned down the victim, a young woman of about her age, slit her throat, chopped off her breasts and plucked out her two eyes.

Recalling how the victim was dismembered, Patience told Daily Sun: “On a fateful Sunday after church service, at about 11 am, my boyfriend, Sunday Noma took me to the Central Market Motor Park in Bauchi. “I was travelling to Kangare to meet my aunt. Suddenly, a woman came on a motorcycle. The men inside a black coloured car asked about her destination and she replied that she was travelling to Kangare. “I waited beside the car, a black Opel Vectra. Five men were sitting at the backseat.

One of them stood up and asked us to enter into the car. The four men told us they were traveling too. We entered and all left” She said that when they arrived at Kangare, a distance of about 15 kilometres from Bauchi, the driver refused to stop the car. According to Patience : “The men inside the car started insulting us. They threatened that we won’t be allowed to alight from the vehicle. They quickly gagged our mouths with clothes but I stood up and gripped the steering of the car.

Turning it, I told them that they should stop or else all of us would die. One of them dragged me down and that was how they captured us. The driver kept driving until we passed Kangare and reached Bishi.” She recollected that the driver stopped the car at a spot. He and the other men in the car led them to a bush near Bishi. They were later joined by another man who led them on a bush path, beating them and urging them to walk faster. “When we arrived at a spot, we were made to sit on a rock.

They told us to make our last call. I called my boyfriend and told him what happened and he screamed. They later seized the phone from us and collected our money” Patience said that around 1pm, they started debating among themselves who would die first between I and the other woman. Eventually, they finally brought the woman who was crying for help. “She kept saying, sister, please help me! They seized her, pinned her to the ground, cut her throat, plucked out her chopped off her breasts and parts of her body.

I did not know where I was again and I urinated on my body. I started screaming that I would not die this way and one of them men started laughing.” Patience who attributed her escape to divine intervention, described how the man assigned to watch over her while the other men left with the body parts, rested his head on a stone and slept off. “When I sighted him, I sprang up and ran as fast as my legs could carry me. I ran for over five hours because I could not trace my way back to the road.

I fell into muddy water until I got to the main road. I saw a man in a car and stopped him. After I narrated my story, he took me to the police station. I took the policemen back to the spot where the woman was killed but we did not meet anybody there but we saw traces of blood.”

The policemen headed to the motor park and made arrests” When contacted, the Deputy Public Relations officer of the Bauchi police command,Mr Mohammed Auyo, said he was not aware of the incident but promised to inquire and contact or correspondent as soon as he got the details.(DailySun)

May God continue to deliver people from the nest of these evil ritual killers.