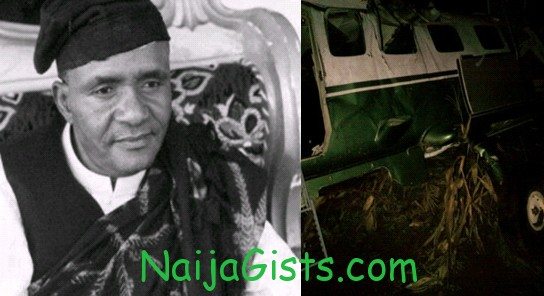 The Governor of Taraba State, Danbaba Danfulani Suntai, was critically injured on Thursday night when his private jet crashlanded at Ngoro Village, located about 30 kilometers to Numan, in the state. He was piloting the airplane, which had five others on board from Jalingo, Taraba State capital, to Yola Airport when the incident happened. naijagists.com

The victims have been rushed to the Federal Medical Centre, Yola for treatment even as arrangements were being made to fly them outside the country for better medical care. The accident, according to the spokesman of the Aviation minister, Joe Obi, involved a Cessna 208 which had six souls on board. The flight, he said, departed Jalingo for Yola but reportedly lost contact with the Yola Control Tower (1720Z) and field in sight at 38 miles estimating landing at 1730Z.

“The pilot lost contact with Yola Control Tower and subsequent effort to trace the aircraft failed. Search and Rescue was immediately activated and the site of incident was located with all victims alive with various degrees of injuries.

The victims have been evacuated to hospital for treatment pending further investigation of the incident,” Obi said. A Pharmacist by profession, Suntai also holds a Private Pilot Licence (PPL) from the Nigerian College of Aviation Technology, Zaria, which he obtained in 2010. He was planning to build an airport in Jalingo, which, he said, would stimulate rapid economic growth in the state. The Accident Investigation Bureau had since begun investigations into the incident.

According to a source, prominent individuals had earlier advised the governor to employ a pilot rather than risk the adventure of flying the aircraft, while still being a governor. In its reaction, the People’s Democratic Party (PDP) expressed shock over the incident and urged its members to pray for the governor and other victims. In a statement issued by its National Publicity Secretary, Olisa Metuh, the PDP said,

“We are officially awaiting news of the true position right now and we urge all our members in Taraba and Nigeria to pray for him.” Suntai’s misfortune came barely few weeks after his deputy, Mr Sani Danladi Abubakar was impeached in controversial circumstances. Abubakar’s impeachment followed the State House of Assembly’s adoption of the recommendation of a seven-member Judicial Commission of Inquiry set up by Justice Josephine Tukur, the Acting Chief Judge of the state to investigate him.

The commission, with Mr. Usman Dangiri as chairman, was mandated to investigate allegations of gross misconduct against the deputy governor. Findings of the panel found the deputy governor guilty of the three allegations against him, prompting Mr. Charles Maijankai, the House’ Majority Leader, to move the motion for the adoption of the report. The report accused Abubakar of misusing his office to divert MDG projects to Yagai Academy, a private school, which belongs to him.

Similarly, the report stated that the deputy governor was guilty of using his office to influence the posting of an officer and interfering in the affairs of Karim-Lamido Local Government Area. Although Suntai was accused of masterminding the plot to remove his deputy, he strongly denied the allegation.

He was born on 30th of June 1961 at Suntai Town in Bali Local Government Area of Taraba State. He attended Federal Government College, Kano (1975–1980) and the School of Basic Studies at Ahmadu Bello University, Zaria (1980–1981). He was admitted to Ahmadu Bello University where he read Pharmacy and graduated in 1984. He did his internship at Yola Specialist Hospital and his national youth service at the State Hospital, Ijaiye, Abeokuta, Ogun State (1985–1986). (DailySunreport)