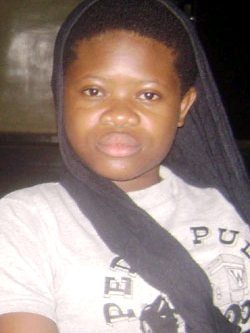 This story was narrated by a 13 year old girl identified as Emmanuela, a Junior Secondary School Student of Shadoff in Igbogbo, Ikorodu area of Lagos State Nigeria. naijagists.com

On the fateful day, the younger lad went for a Thursdays fellowship unknown to her the day was going to be the most terrible experience of her life.

But with the help of God, she returned alive to tell the horrifying story of her kidnap and how she was slated for rituals before God set her free. But other ten passengers could not live to tell their stories.

In Her Own Word Below:

I entered the bus from Igbogbo around 7pm. I was going to my church for our Thursday vigil. When I entered the bus, I noticed that all the passengers in the bus were sleeping. They were about ten. I felt something was wrong and I quickly told the driver to stop for me that I had forgotten my transport fare at home……

The conductor then said that I should not worry that he would not collect money from me. I insisted I would get down, shouting that I was going to church and I would not be able to come back home even if he did not collect money from me. But he refused. As we were arguing on that, the conductor immediately brought out a handkerchief and waved it on my face and that was the last thing I remembered.

“I then saw myself at a shrine with other victims. The following day at the shrine, they began to kill others with knife and machete one after the other. Although we were blindfolded, yet, I was able to see a bit of what was going on. They decided Sunday would be my turn when they would conclude their rituals.”

“We were there without food or water, and when it got to my turn on Sunday, I was taken to the shrine again along with the remaining two. But I heard one of them saying ‘no, they should return me back to where they picked me. We were three left out of about eleven people.”
After the argument, I was laid at the shrine, at that point, with the little consciousness I had, I was praying, I was weak and could not even move my body. I realised that the killer could not bring his knife on me.

The next thing I heard was that ‘take this girl away’. Again, that was what I saw until I found myself at the Ita Elewa, Ikorodu late at night.”But instead of returning me back to where they picked me , they kept me somewhere. The following day which was Monday, they took the three of us back to the shrine. The other two were killed that day, leaving only me. One of them again told the men that they should look for another person to replace me and that they should return me immediately. But they refused saying that they cannot return me and that they should manage and use me like that.
Emmanuela said: “It was dark, I didn’t know how I got there; I just suddenly discovered I was out of their hands, but I was very weak. There, I saw a man in a suit walking on the street. I approached him and asked him where I was? He told me Ita-Elewa; I begged him to take me to my church because it was very close to the area they dropped me. He obliged me. When I entered the church, I fell and lay by the gate.

“As a member of the drama group, we usually hold drama rehearsals every Tuesdays. So, it was co-incidental that the members of the group were there at that time. Somebody who was sent by our leader to check the gate saw me and took me inside, prayed for me and gave me food to eat. Throughout my stay there, I was never hungry, until I came out.”

Asked to describe the area where the ritual took place, Emmanuela said what she saw were materials and accessories used by ritualists, such as charms, knives, machetes among others.
She explained that it was an isolated area, adding “there is no living house in the area. I really don’t know the place, but what I saw there were things used by ritualists. I can’t really say whether it was in Ikododu or its outskirts and I can’t determine the time we spent on the road because I didn’t even know how I got there.”

“It was on a Thursday and we use to have our Faith Clinic in the Church. The Drama group which she belongs, had a vigil and she was going to attend that vigil when she left home. Usually, she comes home after the vigil the following morning around 6:30am. But that Friday, I was expecting her to come but she did not come. I initially thought she slept off in the church.

“Three hours later, I called the leader, and to my amazement, he said she didn’t come to church. I rushed down to the church to tell them when and how she left home the previous day. The following day, I reported the matter at Ikorodu police station. I also reported to our Pastor and other Churches in the area for prayers. Throughout this period, I was devastated.

“I knew something was wrong because I knew she couldn’t stay outside for days without seeing me. I have always trusted her. She has grown to know me very well, she has been with me since she was born. I know what she is capable of doing. She finds it difficult to stay outside our home even when I traveled out of town.

“So, I knew something terrible was about to happen to her. I told people she must have been kidnapped or held somewhere. So, I engaged pastors to help me in prayers. But the revelation from all angles was that she was alive and will return.

My son went to Ajegunle to see a man-of-God and we were assured she would come back. He was even told to mention the day we want her to return. My brother said tomorrow being Tuesday, and the man-of-God said she will come back either Monday or Tuesday. I vacated my house at Igbogbo to my sister’s house at Sabo to keep in touch with people who assist me in prayers.

At about 11pm, my phone rang and I was told she was brought to the church late Tuesday around 11pm. I could not go immediately because it was late as there was no vehicle on the road, but then, I couldn’t sleep.
You know in this kind of situation, people will say a lot of funny and unpalatable things, some said she went after a boyfriend and other things. She was so weak and atrophied when she returned. I couldn’t imagine a girl will stay with a boy for days and look so dirty, weak and emaciated.

So, I decided to take her to a hospital for a test. She was tested, and I can tell you that she was not touched, she remains intact.” said Emmauela’s grandma.

The other unknown ten passengers could not live to tell their story, their identities are not known just as their families most probably would still be searching every nook and cranny for their whereabouts. (Vanguardngr reports)

May God continue to protect all of us from these evil ritualists.