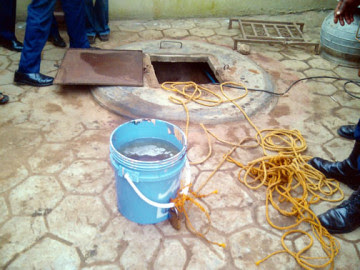 The Lagos State Fire and Safety Service said it has recovered the body of a traditional chief from a well in the state.

The Director of the service, Mr Rasaq Fadipe, told the News Agency of Nigeria (NAN) that the incidents occurred at Imota near Epe.

He gave the names of the dead as 63-year-old Otunba Adeoye Lasisi.

The director said Lasisi, a visually-impaired, was recovered from a well of about 120 feet at Ayayo Road, Imota.

According to Fadipe, Lasisi had planned to go for treatment at a hospital at about 4 a.m. before the disaster occurred.

Fadipe said: “The wife said she was surprised when he called her husband to come and bathe with the hot water she provided that he could not be found.

“The wife claimed she later looked for him outside and found his touch light near the well. She said she believed that, perhaps, her husband wanted to fetch water from the well. It was then they called firemen at Imota.

“It took us about eight hours with the assistance of a specialist before we could locate his body in the well. Firemen had earlier went into the well thrice without locating the body, until the specialist after performing some rituals, brought him out,’’ Fadipe said.