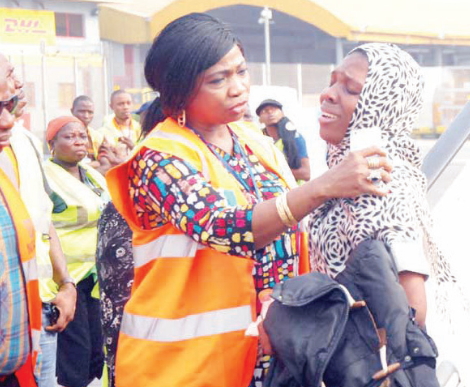 March 12, 2017 – How Nigerian Girls Trafficked To Libya To Work As Prostitutes Were Burnt Alive At A Brothel In Libya

One of the stranded Nigerians in Libya recently rescued and brought back home , Miss. Gift Peters from Delta State said she had spent over three years in Libya and was working as a sales girl in a retail shop and earned the equivalent of N600,000 yearly before she was brought back.

“Daddy, they have deported me,” were her first words as the call that took more than five times of her dialing finally went through. Tears were flowing freely from her eyes. “I am in Lagos. I am fine. Forgive me. Do you have anyone in Lagos that you can send to come and pick me up?”

Gift would later explain that her father is a Pastor and that peer group influence pushed her into joining a set of friends on the trip to Libya.

“I am from Delta state but I was living in Benin. My father is a Pastor. I searched for job in Nigeria for years and I didn’t find any, that’s why I took the risk to go to Libya with my friends who never stopped telling me that I was a fool to think I could have a breakthrough in Nigeria,” she said.

“I was okay in Libya making like N600,000 every year and I was sending money back to my mother. But I was always scared. I was scared each time I remember the girls that died on our way to Libya. I was also scared of being arrested. Some of my friends that we traveled together are in prison. I was lucky that when they arrested me, they took me to the camp where they will deport me because the Police will just come and pick everybody that is black and say we are prostitutes.

I witnessed how they stormed a ‘Connection House’ (Brothel)  and burnt some Nigerian girls alive because they were prostitutes. I am happy that I am back in my country. I have learnt my lessons. I won’t try it again; I won’t ever attempt leaving Nigeria for anywhere.

But if I meet President Buhari, I will tell him to create jobs for girls in the country. Look at all of us that they are bringing back today, the majority are women. There is no job for us to do. In Libya, there are jobs only that the country is not safe. You can always find a job to do that gives you good money. Why would I go to suffer in another person’s country if I have something to do at home,” she added.

One of the returnees, Gift Peters from Delta State who volunteered to speak to journalists on behalf of the 171 returnees, said she was lured to Libya by a Nigerian man who promised to get her a job in Germany. Peters who broke down in tears while speaking said she lost some friends with whom she traveled to Libya.

“I traveled to Libya about 11 months ago. It was one man who took me there. I never knew I was being deceived into slavery because he said we were going to Germany. When we entered Libya this man sold us to someone that has a “Connection House” (a form of brothel used to transit migrants to Europe which also houses prostitutes) and that is where they started maltreating us.

“They would beat me if I failed to cooperate with them to do what they ask me to me. They would even ask some of the girls to urinate in a cup and I would be forced to drink it since I was stubborn. The place was filthy. They priced us as if we were fowls.

“The day that the Libyan people came to arrest us in that house, they just opened fire on us and killed some of us as we were running. I was lucky that I fell down and was arrested. Some of my friends were not lucky. They were killed. Their families will be thinking that they are in Libya or Europe, but they are all gone. There are still a lot of people that are stranded in Libya.

“I am appealing to the government to help bring them back,” she added.