SAHARA REPORTER – The petrol filling station of Mobil at Oba Akran/Ogba Junction, Ikeja in Lagos suffered a fire outbreak early on Wednesday morning, resulting in injury to one person and the burning of at least four vehicles.

The fire started around 6:00pm when a petrol tanker carrying 33,000 litres of fuel got punctured by an iron while maneuvering its way into the gas station.

According to eyewitnesses, scores of vehicles were in the queue leading to the entrance of the station when the tanker arrived at offload fuel, but the motorists in the queue would not give way, as each of them desperately wanted to maintain his/her position in the queue in order to get fuel on time. 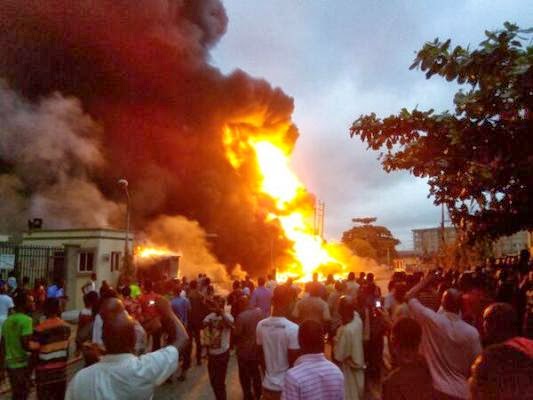 It was while manoeuvring its way about the inadequate space at the entrance that an iron pierced the tanker and petrol began gushing out. The fastest of the motorists zoomed off to avert the looming fire, but the drivers of two buses and two cars were not fast enough, and their vehicles were consequently razed. 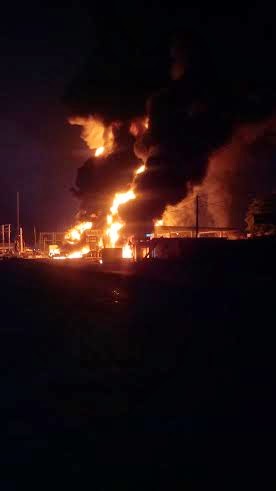 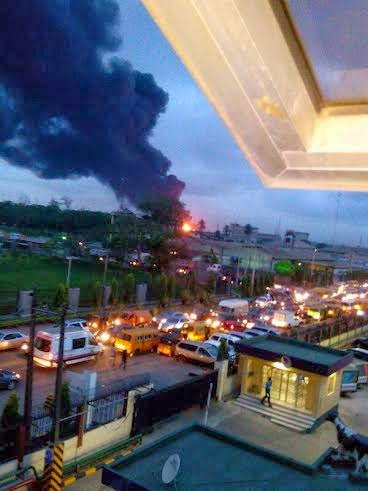 Speaking afterward, spokesman of the NEMA in the South West, Mr. Ibrahim Farinloye blamed the sole injury on carelessness of the man involved, and urged citizens to avoid gathering at scenes of tragedies, especially if they have no role to play. 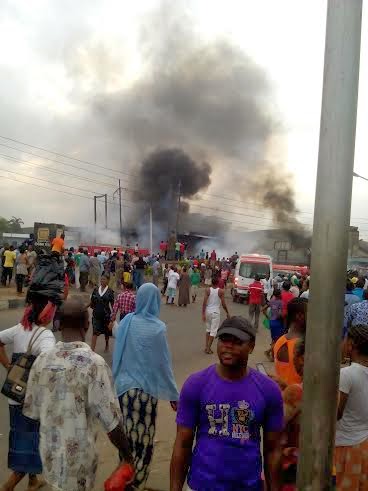 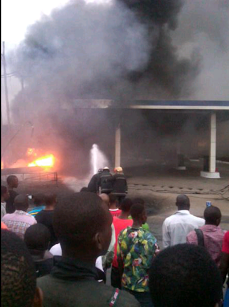 “A guy of about 25 years, an onlooker, was injured by the pole because the PHCN pole fell on him. He was quickly taken away by LASAMBUS for treatment”, Farinloye said.

“We have always warned that except for fire service personnel, everyone else including other emergency stakeholders during fire outbreaks should stay 300 metres away.

“Also, we have appealed to people who have no business in emergency situations to stay off, all these steps are to ensure adequate crowd control as well as avoid situations such as this”.

He also urged motorists and other petrol consumers to consider their safety first in whatever strategies they adopt in availing themselves of the commodity.

“As a result of fuel scarcity, some people have resorted to storing massive petroleum products even in overhead tanks, as was discovered in the case of Christ Embassy Church the Tuesday night”, he said.

“Also, because people know that Mobil always has fuel, they queued there this morning to the point of not allowing the tanker entrance. It is obvious [that] they were too impatient and feared others will take over their lines if they should give the tanker passage.

“I want to appeal to Lagosians that, in as much as there is scarcity, people should avoid risking their lives. All that is required is patience and everyone will get fuel. People should avoid storing up petroleum products especially large quantities because it is risky.

“Also, they should endeavor to contact firemen immediately there is an outbreak. If we are called early, we can bring the situation under control without loss of lives and properties”