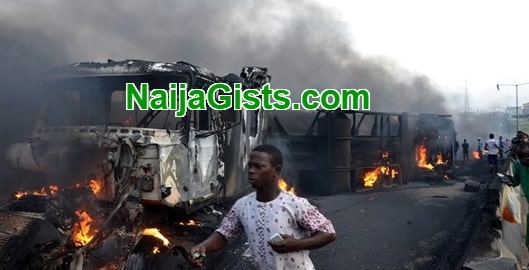 Many people were feared dead today as a fuel tanker exploded in Agudo village Benue state.

Agudo village is in Tarka local Government are on Makurdi – Gboko federal Highway at a bend in Benue state.

Tarka is the ancestral home of Minister of Special Duties and Intergovernmental Affairs Senator George Akume.

An eyewitness said the explosion happened when a loaded petrol tanker attempted to speed through a bush burning by the highway.

The incident, which caught the residents of the sleepy Agudo community unaware, also destroyed many houses and property.

Bush burning in Benue state is a way of life, especially during dry season where people go after bush meat.

The tanker driver was believed to have been caught in the bush fire unawares.

At press time it was chaotic situation in the area, causing massive gridlock on the federal highway.