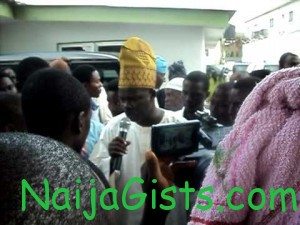 Dec 16, 2012 – How Seven Students Were Crushed To Death By Granite Truck In Ogun State

They were 16 with different missions but ended up the same way – tragically. Seven students were crushed by a granite-laden truck as they were returning home after school in Ewekoro local government area of Ogun State. Few hours later, another four persons died when a Toyota Camry car marked, Lagos MUS 948 AR, and a Mazda marked, Lagos JP 602 AAA, collided at Olodo village along Abeokuta-Ibadan Road in Obafemi-Owode local government area.

As if it was a day of death in the state, another accident that claimed the lives of five persons occurred at Ogere village, by the old toll gate along Lagos-Ibadan Expressway in Sagamu local government area.

If all the 16 victims had known that death was lurking around, perhaps they would have kept in-doors. Even if the parents and relatives of the seven students of Itori Comprehensive High School, Wasimi had a premonition of the tragedy,they might have stopped their wards from going to school that day.

The day, a Wednesday, had a unique date, 12-12-12, which some people, especially in Christianity, attached importance to, but it brought bad tidings to the families of the victims. The three separate auto accidents occurred on three major federal highways: Abeokuta – Ibadan Road in Obafemi-Owode local government; Abeokuta – Lagos Road in Remo North local government; and Lagos – Ibadan Expressroad in Ewekoro local government. The first accident was reportedly caused by the loss of control by the driver of the granite- laden truck which fell on the home-bound students after school hours.

The development was said to have provoked anger of some residents of Itori who were mainly youths as they took to the streets, burning tyres in protest against the accident and smashed about 50 vehicles.

Sunday Vanguard reliably gathered that the anger of the residents stemmed from the lackadaisical attitude of the chairman of the local government, Dele Soluade, and security agencies to rescue the victims. In an attempt to curb the spread of the violence, an Armoured Personnel Carrier (APC), belonging to the Ogun State Police Command, was deployed to the scene.

Confirming the accident,the Itori Unit Commander of the Federal Road Safety Commission (FRSC), Fatai Bakare, explained that the corpses of the students had been deposited at Ifo general hospital.

The second accident where four persons died, Sunday Vanguard gathered that axes were used by sympathisers to cut the vehicles before the corpses of the victims could be removed. Confirming the accident, the Sector Commander of the FRSC in Ogun State, Mr Ayobami Omiyale, attributed the cause to dangerous driving and over speeding.

Confirming the third accident, which claimed five lives, the Ogun State Police Public Relations Officer (PPRO), Muyiwa Adejobi, said the accident was caused by a cement- laden truck.He said the truck fell and blocked the road after Ogere in Remo axis on the way to Ibadan as against the insinuation that the victims were killed by robbers operating on the road.Also confirming the incident, the FRSC commander in Ogere, Mr.Godwin Sangbana, said the articulated vehicle heading to Ibadan lost control and rammed into three commercial vehicles.

Sangbana said the corpses of the victims had been deposited at a nearby hospital. Some residents of Ogun State blamed the accidents on the bad condition of the roads. According to Wale Akande, an eye witness of the Itori accident, a pedestrian bridge is needed in the area for the protection of the people especially students. (Source: Sunday Vanguard)