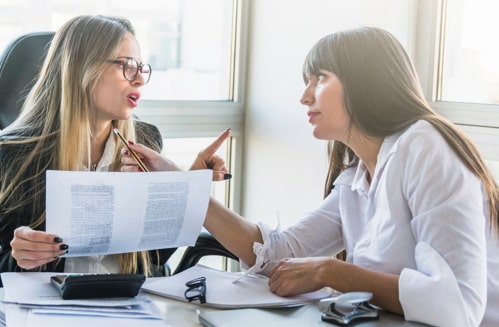 How To Deal With Difficult People: How To Handle Difficult Family Members, Friends, Bosses & Coworkers

Difficult people have certain personality trait that makes it hard to get along with them. These people can come in the form of a relative, colleague, neighbor, customer or employee so it is inevitable to avoid interaction with them.

How to deal with difficult family members

Some family members are hard to please. They always look for every means to make us suffer. As much as you want them to be different you can’t force them to change but these tips will help you get better at diffusing the situation.

Reflect on how you feel:

Take deep breaths to manage your reaction to the situation.

Find out why they are out to get you:

Try to find out if you were the one that caused them to act that way. You could ask them directly or try to find the reasons on your own.

Ask them to stop acting that way towards you.

Avoid possible interaction with them

Be prepared. Know what pushes their button and just try to ignore everything they do because not every fight needs to be fought.

You might want to argue to prove your point but that won’t help the situation. Just let the person think he/she is right.

Avoid subjects that will lead to an argument

Most family members bring up topics that will get you angry so it is best to not give them the satisfaction.

Take a break from them. Don’t give them to liberty to encroach on your personal time.

Cut ties with them if you can’t continue enduring.

How to deal with difficult friends

Dealing with difficult friends can mess up our peace of mind but here are ways to avoid negative interactions with them:

How to deal with difficult bosses

Working for someone who never values your work or treats you badly can take a toll on you but here are ways to help you manage and make the best out of the situation.

Don’t be rude or disrespectful because of the person’s attitude.

Reacting will only bring more tension in the work environment and make it hard for you to work well.

Don’t allow it affect your work:

No matter how bad your boss behaves towards you, still try to be in good terms with them. Continue to work diligently and don’t give heed to whatever they do.

Be one step ahead:

Most times your boss might add more workload for you just to prove that you are incompetent. So the best thing to do is to anticipate the tasks for that day and get it done on time.

It is frustrating to work for someone who seems to have no respect for boundaries. You’ve just got to set them yourself to avoid further interactions.

Identify what triggers their behavior:

It could be because you did a bad work or that they are never in a good mood. Finding out the cause will help you understand how to deal with it.

Talk to your boss:

Speak up instead of bottling it up inside or lashing on others go. Even if you lose your job after speaking up at least you’ve said your mind.

Don’t give room for intimidation:

If your boss is always yelling at you or downgrading your efforts don’t give them the satisfaction of seeing you cower in fear. Just keep your head high and stay calm.

Record everything that has taken place:

Do this if your boss is getting too personal just because you refused to concede to his/her demands.

You can leave the job if you’ve tried everything to make things better and it is not working. Staying in a toxic work environment is not worth it because it affects your well-being.

Before working for a firm or organization try to ask questions about the person in change. Don’t accept the job if you can’t cope with such people.

How to deal with difficult customers

For your business to be successful you need to be good at addressing issues relating to your clients. There are some customers that always want things to be done their way and if they don’t have their way they cause a scene. However, there are ways to manage your interaction with them;

Treat them well despite their behavior:

Be sincere about the way you address them. Reacting will make the company look bad.

Pay attention to what the person is saying

Show the customer you care by listening to what they have to say because you might be able to find out what caused the issue.

Lower your voice when addressing them

Don’t try to talk over the customer or argue with them. Even if they are creating a scene still stay calm.

Consider that the person might be going through something at that time. It will help you address the issue calmly.

Keep to your promise:

Stick to the scheduled time you gave to a customer for their issue to be resolved. If not they will feel that you are just trying to do avoid them.

Some customers can get aggressive because their needs are not met. They may file for a lawsuit if you say the company is to blame for the misunderstanding.

Acknowledge their time and patience with you as you work to solve the issue.

Look for someone else who knows how to deal with their attitude.

Try to limit contact with the person if you know you can’t be calm around them.

How to deal with difficult employees

There are some employees that like being difficult. They find it hard to take instructions and they act rash to both clients and fellow workers. As a boss you can:

How to deal with difficult coworkers

No matter where you work there will always be difficult coworkers who gossip, never get the job done and never take responsibility for their actions. The other person’s attitude may be beyond your control but it is your choice to decide how to react. Try out these tips to help you deal with the difficult people you face at the work place.

When there’s an argument you’ve just got to pause while the other person is talking and listen to their opinion before stating yours because no progress can be made if everyone talks at the same time.

You can be easily agitated and frustrated when dealing with someone who is difficult and unreasonable so it is better to keep a clear head. Don’t over react or try to prove your point. Reaction makes you sink to their level.

The person might be unreasonable because he/she is going through some challenges and that’s the only way to express the frustration or they might be that way because they are intimidated by you.

They may be acting difficult just to get your attention.

Don’t laugh at them:

You’ll make them to act more unreasonable. They will feel that you are trying to belittle them.

Don’t hide from them:

Hiding would make you look weak and it won’t solve the problem.

Confront the person instead of letting the behavior continue:

Face the person and tell them how annoying their actions are and why you won’t tolerate it anymore. Let the person know that if the action continues you’ll report them.

You can vent your anger out outside the work environment by either talking to a close friend or engaging in physical activities.

Don’t quit your job for them:

You can’t leave your job every time a colleague is being difficult. Just avoid situations that would make you cross path with the person.

If their behavior towards you is getting too much you can report to the boss or head of department to deal with them. That doesn’t mean you should report every time you encounter them.

Drama As AAC Party Outcast, Leonard Nzenwa Expels Sowore From His Own Party
How To Control Your Emotions