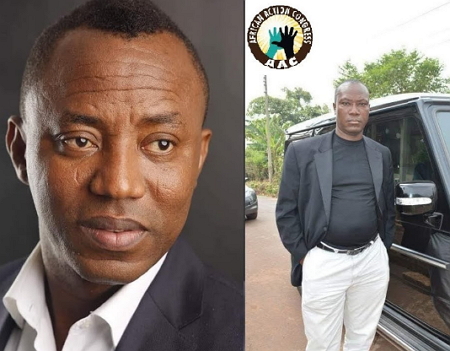 Drama As AAC Party Outcast, Leonard Nzenwa Expels Sowore From His Own Party

A faction of the African Action Congress, AAC, has expelled Omoyele Sowore, its presidential candidate in the 2019 general elections.

Also expelled are 28 other members of the party, according to reports from Rockview Hotel Owerri, where the faction held its convention.

On Thursday, the AAC of which Sowore is the chairman warned about a planned convention by Leonard Nzenwa, who it said had been expelled from the party.

The statement warned the Independent National Electoral Commission (INEC); all party faithful and the media about the plan.

No such gathering has been planned or sanctioned by the AAC; and any such gatherings in the name of the party are baseless, criminal and motivated by mischief, Adeoye said.

“This criminal effort is purportedly led by one Leonard Nzenwa, who was recently expelled by the National Executive Committee of the party in a well-attended emergency meeting on the 27th of July 2019.

“Time and again, this unsavoury criminal character has shown he will seek any opportunity for financial gain, including attempting to hijack this great party. In his usual myopic manner, he may have believed that the events of the last few days has presented an avenue for his nefarious ambitions, but, as is usually the case with Mr. Nzenwa, he is wrong. It is impossible for a reviled individual to foist themselves on a democratic political party, and impossible for an expelled member to hold a convention.

“The African Action Congress therefore issues a call to the police and security agencies for the arrest of Mr. Leonard Nzenwa and his criminal actors, and calls on the general public to dissociate themselves with any actions of this expunged delinquent”..

Sowore was arrested last week by the operatives of the Department of the State Service, DSS, at his residence for championing #RevolutionNow movement.

On Thursday, the DSS got a court order to detain for 45 days, in the first instance.