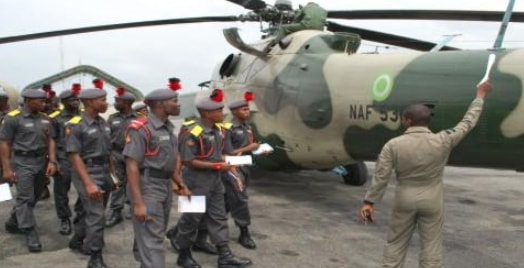 The Nigerian Air Force is the air branch of the Nigerian Armed Forces and is responsible for protecting the Nigerian Airspace. It is also sometimes involved in ground combat operations such as has to do with the Boko Haram insurgency the North Eastern part of the country which you can see if you read Nigerian Air Force News today. In order to replace retired officers and keep the force going, officers are recruited yearly into commissioned officers cadre and this is done either by commissioning graduates of the Nigerian Defence Academy (NDA) or by recruiting graduates of conventional Nigerian Universities through the Direct Short Service Commission. The commissioned officers play different roles in the Air Force. Some are posted to Administration, some Finance, Engineering and the rest depending on their fields of specialization. In this article, we will be looking at how to join the Air Force as a graduate and become a Pilot.

How to apply to Nigerian Air Force

Application is usually done online using an application portal that will be provided when the form is released. Although the application form has not been released, it is usually released after the NAF recruitment form has been released and the information will be made available on Nigerian Air Force website airforce.mil.ng when the time comes so you can be checking to make sure you don’t miss anything.

For applicants with professional qualifications, the following guidelines apply when putting in an application.

The application is free of charge and applicants are to bring the following to the enlistment centres of their choice.

Photocopies of all documents and credentials which will be collected from you at your enlistment centre.

After you complete your online registration, you should print the following except if you are a serving military personnel.

If you provide any false information and you are caught you will be disqualified and you may be prosecuted so make sure every information you provide is accurate and all your certificates are truly yours.

You will be required to meet the following requirements before you are qualified to apply online.

In order to become a pilot in the Nigerian Air Force, you need to possess a B.Sc in Physics, Mathematics, Geography or a B.Eng in Electrical or Mechanical Engineering which will help you to be easily trained as a pilot in one of the Air Force Flying Training Schools in the country.

If you are interested in applying for Nigerian Air Force DSSC recruitment, definitely you will be curious about how much Air Force Officers earn. I will give you a breakdown of the ranks and monthly salaries of commissioned officers of the Air Force here so that you can have a feel of what to expect. The following are the ranks of Nigerian Air Force in descending order of seniority.

The following are the ranks of the Nigerian Air Force and their monthly salaries in ascending order of seniority.

All the information required to become a pilot in the Nigerian Air Force has been provided above. If you know any other information that is not included you can include it in the comment box for the use of others and if you have questions you can ask too and we will reply you as best as we can.Thanks for reading and good luck with your applications.

How to join the Nigerian Army & Navy As A Graduate: Application Requirements, Website & How to Apply
How To Become A Flight Attendant, Air Hostess In Nigeria..Step By Step Guide To Success