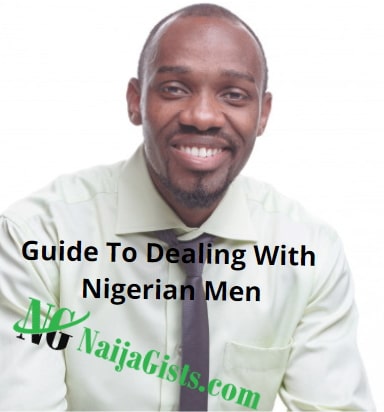 How To Know If A Nigerian Man Is Serious About You

There sure is something intriguing about Nigerian men. Local and foreign women are quite curious about them. Some avoid them totally and some would like to satisfy their curiosity about them. Since Nigerians are a speck of people you find everywhere in the world coming across them isn’t difficult at all. Ladies, who are not familiar with the character of Nigerian men, may have nagging questions and some of these questions will be addressed as we go on.

When A Nigerian Man Calls You Dear

Okay so you’re really into this Nigerian guy and would want to know if he feels what you feel. If you want to find out about this, then you should watch his actions as well as his endearments.

As far as endearments go, ‘dear’ is one of the most commonly used ones by Nigerians generally. Usually if ‘dear’ is used on you by a Nigerian man, then chances are he just sees you as a friend and nothing more.

But it could also be that he trying to take things slow. If this is the case, then his endearment should not only revolve around dear, but change as time goes on. He will possibly find you a pet name or some endearment he uses just for you. But as far as the ’dear’ endearment goes, it is the most carelessly used one and most often doesn’t mean he is interested in you.

How To Know If A Nigerian Man Is Married

The idea of using a wedding band to identify a married person or that slight tan on the fourth finger of your left hand hardly works with most Nigerian man, because they hardly ever wear their ring long enough to leave any evidence. So how exactly do you get to know if he is married? If you hang around a Nigerian man long enough you can often tell he if he is married or not

He Wears His Ring On A Different Finger

A Nigerian man who is married may choose to wear his ring but not on his wedding finger. His ring may not even look like your idea of a wedding band. But look out for any form of ring. You could also look out for a slight tan on his ring finger. This doesn’t mean much because he may not wear his ring long enough to have one but it’s still worth a try.

He Never Lets You Visit

A married man will most likely not let you visit him whenever you want. You may not even know his place for starters. He would rather meet you at your place or some other location. But should he eventually let you visit, look out for personal effects pictures, property and stuff he might be trying to hide. If the house appears too bare or impersonal this should raise your suspicions.

It may not be that his married, it may mean he is juggling quite a number of you. If he constantly ignores your calls and ignores calls in your presence or answers them without giving away much concern or detail. Then suspect him.

You Have A Visiting Time Table

You are not free to pay him a visit at will; that is if he allows it at all. He gives you specific times when he wants you to visit because he is conveniently hardly ever at home.

You Can’t Reach Him

A married man will most likely not pick your calls in the company of his family. So you find that he will prefer to send you a text or you may be unable to reach him at all, at specific times. If you observe either of these two things, it is right to be suspicious of him.

How To Deal With A Nigerian Man

Dealing with a Nigerian man requires you be really smart and know how to choose your battles. If you are new to dating Nigerian men then these two things are really what you should learn.

How To Keep A Nigerian Man

If you want to keep a Nigerian man then the top on your list of things to do is to be warm, welcoming and respectful towards him. Nigerian men are crazy about respect a number of them view it as an entitlement and not something to be earned.

But either way, to keep a Nigerian man, you have to respect him in the presence of his friends and in private. When you respect a Nigerian man you win him over and win his admiration.

Avoid stalking him like a crazy person, being reasonably jealous is allowed, but know where to draw the line. Out rightly stalking him and demanding he explains his every action with other females all the time, gets old real quick. This will easily tire out a Nigerian man and he would begin to disconnect from you.

To keep a Nigerian man in your life for a long time, you need to know how to organize and keep a home clean and welcoming. Also you should know how to cook edible and delicious meals. He may say he really doesn’t care but if he truly wants you for keeps he would require that you know how to Cook.

He may not expressly say it but your lack of a homely nature can very well hold him back from proposing. Should another lady who meets this requirement come along, be very sure that your man is gone.

Desperation can be picked even from a distance. Nigerian men will either prey on a desperate female or runaway altogether. Unnecessarily pressuring a Nigerian man will eventually become too exhausting for him and he will leave. Let things flow naturally and don’t be too in a hurry. If things are taking too long then move on to find what it is you really seek.

What To Expect When Dating A Nigerian Man

The first thing to prepare for is his general lack of romance and chivalry. He may not open doors for you. He may walk through the door before you. You will most definitely open the car door by yourself. He won’t send you spontaneous romantic notes or get bring you breakfast in bed neither will he surprise you with flowers or dinner after work.

But make no mistake, if he truly loves you, he will make the effort to show you in his own way. A Nigerian man may not show you he loves you in the manner in which you expect, but the sincere ones do treat their women quite well.

If he is serious about you, expect to meet his friends and family. Expect to appear at family functions and to be smoldered by his many family members and if you are accepted by them, you will most likely have to visit, make calls to his family and receive same from them. If you are with a Nigerian man, you belong to his friends and his family too.

When you have a Nigerian man around, you should realize their quite proud species or men who find it difficult to accept fault or apologize for an offence. Now note, most times, a Nigerian boyfriend who has offended you, most likely isn’t going to say I’m sorry.

Nigerian men don’t apologize with words but with their actions. This is how you get to know he is saying sorry for an offence.

Questions To Ask When Dating A Nigerian Man

Is he mature-minded? Does he take the relationship serious enough? These are questions you should first ask yourself. Is he the type to be open to commitment or is he still too busy playing around. Do you notice a growth in your relationship? Are future plans being discussed and taking shape?

Questions to ask about him should be things like; Is he divorce or has a baby mama and can you live with such arrangement on a permanent basis. Ask and find out seriously about these things so you don’t spend your time fighting unnecessary battles and living in regret.

What are his mapped out plans for the future? Does his attitude and behavior pattern fall in line with yours? These are important questions that should be answered in all sincerity.

Generally men can be quite sneaky in their dealings and Nigerian men are no different. But if a Nigerian man is being too sneaky that’s a huge challenge. It means he has something big to hide. When he is sneaky about his whereabouts; where he is, where he went, his personal devices and such, you should watch out something is definitely not right.

When you don’t know where he lives, his friends and family his job and things like that. You have been around him a while and find you know nothing concrete about him. Suspect the guy. These are sure ways to identify a sneaky Nigerian guy.

Nigerian Men In The US: Are They Faithful

This is one of the most asked questions about diaspora Nigerian men. And the truth is that while there are a few exceptions, Nigerian men in the US are hardly ever faithful. Nigerian men are known to be desperate enough to date and marry American women to gain a permanent stay. So being faithful is not really a priority for them.

A Nigerian man may even have a wife and kids back home. And he may just be using you. Be smart enough to identify this kind of Nigerian men. To be safe be suspicious of all Nigerian men until you proof beyond every doubt that he isn’t just using you.

There are also those few Nigerian men who genuinely like you and are willing to faithfully commit. But remember, this kind is extremely rare.

Most Nigerian men are in America for greener pastures, to become permanent residents and to generally make as much money as they can. Fidelity is not on the list.