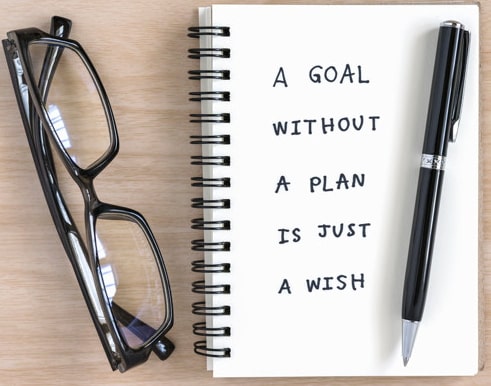 How To Follow Through With Your New Year’s Resolutions: Guide To Setting Attainable Goals &  New Year Resolutions

The list goes on and on. But less than a quarter of those resolutions ever see the light of the day. At best less than 30 percent of the resolution setter reverts into their old self barely three weeks into the year.

A look at the antecedent of New Year resolution reveals it is easier to set the New Year target than keeping them. Most people discovered they have been struggling with the same resolution for a very long time.

You are probably one of the people who rely on your will power to get your desire for the year to scale through. But more often than not you have found out you fizzled out before you know it. Perhaps you have concluded you are not going to make any move this year.

That will be too bad as your best is yet to come. Even those who are at the top of their game still see the area they need improvement. So instead of sinking into despair, I want to show you some insanely simple guide to setting attainable new year’s resolutions and see your resolution this year hitting the target and bringing you your expected desire.

It will be surprising to know you only have to change your game plan. Log on and see how convenient it will be. You will wonder at the end of the year how you were able to cross the hurdle.

It is frustrating to set a New Year resolution and not achieve it. The reason is not far-fetched because you have not simplified your idea.

A habit once formed is not easily changed. It is said you can’t teach an old dog a new trick. Also, it is not easy to change an adult to start using the right hand when he grew up using the left hand. Since it is your game, set a realistic plan to reach your aim. Make it simple that you will get over it in a short time.

Part of your simplicity is to limit the numbers of the area you want to change in the new year. If you are able to turn the table around for your favour before the end of the year that will be okay. Then you can set a new target for the rest of the year. That is better than setting too many hurdles and not to overcome them.

This is one of the benefits of writing down your resolution as I mention later. A realistic goal is the one you set within your achievable capacity. I must remind you you are not competing with anybody. It is about your welfare and what is good for you. Since no two people are exactly the same, be yourself.

What makes most people rescind in their lofty dream is because it is too bogus. It looks scary. An impossible task. So if you want to follow through with your new year’s resolutions, breakdown your goal.

To ease the burden, breakdown your resolution into digestible bits. Take them one at a time. Get over one before moving to another. If you are reducing your sugar intake, for instance, you don’t cut off completely your sugar intake at a single swipe. You reduce them gradually until you get to your targeted quantity. This you do not following blindly the discipline of someone else.

You are not even sure how rigid he or she is when it comes to the discipline at his or her  level of indulgence in this same habit you intend to change.

Setting a milestone should be time-bound. New Year resolution is similar to setting any goal. Thus each stage has a time frame. Though heaven will not fall if you didn’t reach that goal at that time. Yet, it is important you have a specific time for each of your stages. The set time will drive you to take action in good time and be serious about your plan.

There is no better time to act on your New Year resolution than now. There is no such thing as a perfect time. In reality, taking a step when you have the steam for a particular idea is the appropriate time to lunch out. Delayed action feeds procrastination. And as you know, procrastination is the thief of time. The journey of a million miles begins with a step.

Keep a record of your progress

One attribute of those who follow through with their new year’s resolutions as you shall see later, keeping a record of your progress toward achieving your goal will give you encouragement.

You start off by writing down those changes you are expecting in the New Year Vis a Vis where you were last year. Since our memory is porous, writing down your point will give you direction.

It will guide your focus and prevent drifting from one idea to another. As I write this post, I remember one of my New Year focus but when I checked my notepad I discovered it is on number three in my lists. Your list would not allow you running another person’s race and help you defend your purpose before your peers.

Don’t be hard on yourself

It is natural to feel guilty about your inability to keep your previous resolutions. The failure can impair your thinking to feel you are not likely to meet up again this year. If you toll that line, you will be too hard on yourself. We all make mistakes. Everyone fails sometimes and some people many times. So forgive yourself and forge ahead.

Don’t drag yourself too hard to bear the process of fulfilling your New Year resolution. Instead of helping you forward it will scare you to back out.

Be accountable to someone

Changing an old habit is like swimming against the tide. If you are thinking of a new direction it means you are cultivating a new fallow ground that requires someone to lead you by hand.

This person can be your spouse, boss, religious leader, a senior friend or a respected friend.

Share your yearning, aspiration, and weakness with someone who can encourage you and lift you up when you about to give up.

What gets talked about gets done. Talk to yourself. Tell your confidence about it. Ask your friend and spouse how you are fairing. Tell yourself you are getting over the obstacle.

Reaffirm that you are not going to fail this time. Buddy, there is power in your confession. Your confession is your possession.

You can’t follow through with your new year’s resolutions if you believed it will be a smooth sail. If you check your legs you will probably notice some old bruises. Those are the marks of your growing up. No one at the ladder of success who had never fallen at rung of the ladder.

In reality, champions are those who had mastered the craft of handling failure correctly. What am I saying? You will fail and fall like any other time or like any other people. Just get up, put your pieces together and forge ahead. At that juncture, you feel like throwing in the towel. This is not abnormal. It is also human to feel disappointed in yourself especially if that is not your first time attempting such goal.

Pat yourself on the back

Nothing gratifies than seeing you succeed. Celebrating your progress as you inch toward realizing your dream act as an impetus to push you forward. That tells you your dream is achievable. By that, you applaud the strategies you have used so far because they are working.

It is about you

The simplest thing in life is to live your own life. Trying to imitate others will only leave you with bumps, bruises, and injury from several failed attempts. Therefore your New Year resolution should revolve around your capacity, makeup, and value system.

Setting your New Year resolution that revolves around you will guard you against the rat race. Avoid running to keep up with the Joneses.

Consequently, your goal should be such that resonate with your personal dream and aspiration.

The number one killer of goal setting and new year resolution is setting an ambiguous goal. I am going somewhere, that is an ambiguous goal. Where are you going? I am going to the cinema is specific. With that, someone else apart from you can track your movement. As I said earlier, your confidant, who will hold you accountable, can checkmate you if you are off the track? This is possible because he or she knew where you are coming from and where you are going.

Not only that, it is one of the yardsticks to measure your progress. It gives you the idea of whether you need to review your strategy or maintain the old pattern.

Being specific also helps you avoid distractions. With that, you get to your destination quicker.

If you didn’t start you can’t finish. If it is in your heart, it will get to your hand. Though this is not a blanket rule, following this guide on how to follow through with your new year’s resolutions  will also be useful in other aspects of your life.