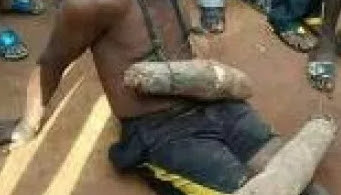 Enugu Police command has started investigating the brutal murder of a man accused of stealing a tuber of yam in Enugu.

On Wednesday the 4th of October 2017, some residents of Amorji Nike Community in Enugu East LGA of the state lynched a man whose identity is yet to be established to death for allegedly stealing a yam tuber.

His lifeless body was later dumped in the community where it was later recovered by security operatives.

Two suspects have been arrested in connection with the jungle justice.