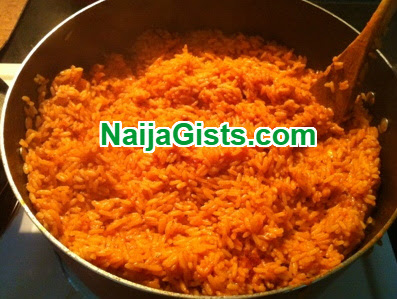 A bricklayer who has been out of job for a while now and without means of livelihood stole his neighbour’s pot of rice yesterday in Ifite area of Awka Anambra state.

According to eyewitnesses, the 47-year-old man reportedly observed a neighbour simply identified as Mama Ebuka cooking Jollof rice (West African party dish) and waited until the meal was well cooked.

The moment Mama Ebuka stepped inside to take a dish for herself, the bricklayer quickly rushed to the kitchen and grabbed the big pot of jollof rice not knowing that a girl saw him.

Mama Ebuka soon raised an alarm when she couldn’t find her pot of Jollof.

In the process, the girl who saw the suspect exposed him.

To cut the long story short, Mama Ebuka rushed to the suspect room only to see her pot of Jollof rice half empty.

The suspect confessed he stole the pot of food because he was very hungry and had not eaten for three days.

Mama Ebuka pitied him and promised not to report to the police.

Another neighbour who witnessed the drama that took place after Mama Ebuka raised an alarm, Emmanuel Okafor said:

“I know the man very well. He is not a bad person but I think the situation in the country is pushing people into things they would not ordinarily do. I am certain the worst is yet to come”.