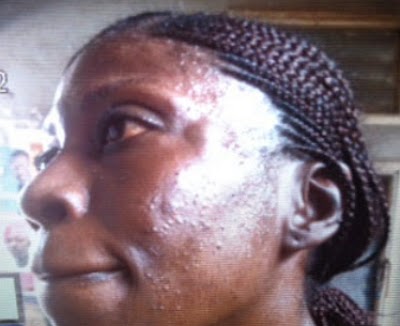 An Ikeja Magistrate’s court was turned into a battleground when a man, Olufemi Ogbiyele engaged his wife, Bola Ogbiyele, in a fight. The incident, which generated a lot of attention inside the court premises, was alleged to have begun when a friend of the divorce-seeking couple pleaded with the husband, to settle out of court but the plea fell on deaf ears.

Instead, Ogbiyele was said to have grabbed the wife’s handbag, while demanding custody of their three children, and beat up his wife to the chagrin of court attendants.

Counsel to the estranged wife, Barrister Shittu Oladeyinde, who spoke with P.M.NEWS said, “I am also the embattled woman’s friend and was aware that a friend called them to settle out of court. Unfortunately, this fell on deaf ears and the man flared up, demanded custody of his children.

Oladeyinde then explained the genesis of their problem. “It actually started on 11 February last year when the woman locked herself up in the children’s room after he beat her up. She then left for her mother’s house afterwards to avoid being lynched.”

The counsel further disclosed that “another lawyer, Barrister Taiwo and a pastor had met with the husband, asking him to resolve the matter amicably and take his wife home but Ogbiyele agreed to do so on the condition that the wife stopped working, which the woman blatantly rejected.

“It was after this meeting that the man sent a text message to the wife, asking her to prepare her lawyers for a divorce,” he explained.

The petition for divorce with suit number ID/377HD/13, filed at the Ikeja High Court last year September read, “failure of petitioner to comply with the provisions of section 15, sub-section 2(d) of matrimonial cause, act caption 220 of the Federal Republic of Nigeria 1990″.

While narrating his story, Ogbiyele told the court that his wife was sleeping with different men when she travelled to the United Kingdom in March 2012.

He further stated that on 12 February last year, his wife slapped him when he accused her of stealing his properties and solicited the support of her lovers to beat him for bringing up such an allegation against her.

In response to the allegations levelled against the man, the second counsel to the wife, Akin Aroyewo stated that, “In the first place, she did not abscond from her matrimonial home on 1 September, she ran for her dear life when the husband wanted to kill her with an iron belt.

“They have not lived apart for two years but the husband is the one who is frivolous and temperamental. This he even showed by abusing court proceedings.”