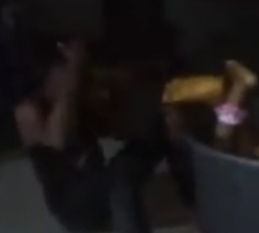 The police today rescued a man from being beaten to death for allegedly killing his wife.

The man was caught on Balogun Street, Oshodi on his way to dispose his wife’s body. He was with his three children.

Luck ran out on him when some youths stopped him to ascertain the content of the smelling bowl on his head.

They were shocked to find that it contained human parts.

The irate youths stripped him naked and started beating him.

Some patrolling policemen rescued him.

He was taken to Akinpelu Police Station alongside with the three children for further investigation.

Police spokesman, Chike Oti, a Superintendent (SP) confirmed the arrest of the man.

Oti said the man is being investigated for alleged murder of his wife.

“The three children were taken away for proper care. Their mother is dead and their father is undergoing murder investigation,” he said.