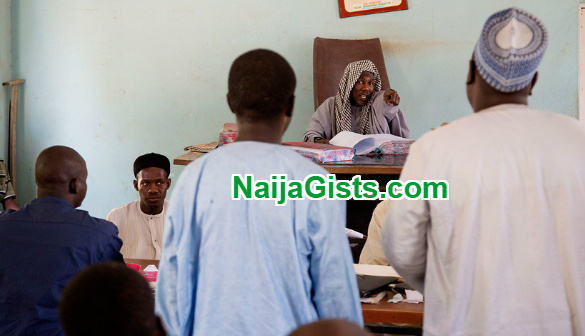 September 7, 2016 – Husband From Hell: Man Forces Friend To Rape Wife At His Home In Kano

A Kano Magistrates’ Court sitting at Noman’s Land on Tuesday ordered the remand of three persons in prison custody for alleged conspiracy and adultery.

The prosecutor, Insp Shuaibu Musa, told the court that the accused were arraigned for conspiracy and adultery.

He said the offence contravened Sections 97, 92, 387 and 388 of the penal code.
The prosecutor said the first and third accused, Abdulwahab and Sa’adatu were husband and wife.
Musa said a complainant, Malam Haruna Nuhu, had on Aug. 24, reported the case at Gezawa Police Division, Kano.

He said Nuhu had alleged that Abdulwahab had on Aug. 22, at about 11 p.m conspired with the second accused, Muktar to forcefully have sex with Saadatu.

“Abdulwahab invited his friend, Muktar to his house situated at Gezawa, Kano on the same date, where Muktar had unlawful sexual intercourse with his wife at his presence.”

He said the Saadatu confessed that her husband forced her to have sex with his friend and threatened to deal with her if she refuse.

Musa also said Saadatu was thereafter rushed to the Gezawa Hospital for treatment.

While the first and second accused pleaded guilty to the charges, Saadatu said she was forced to commit the offence.

Chief Magistrate Maryam Sabo, however, ordered the accused to be remanded in prison custody to allow the police complete investigation.

She adjourned the case until September 20, for mention.

Wait a minute! which kind Judge is this, a woman was raped in her husband’s presence and yet she is being tried for adultery…. This is sad!