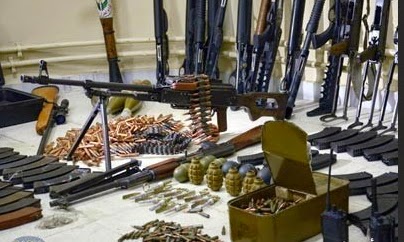 A suspected international gunrunner who had been on the wanted list of the Police, has been arrested by the Anti-Robbery Squad (SARS) of the Lagos State Police Command.

The suspect, identified as Amao and the intermediary between him and criminal buyers, Olatunji (surname withheld) are facing interrogation at SARS.

Recovered from them were 10 AK47 rifles and 19 AK7 magazines, all loaded with 30 rounds of ammunition.

Amao, who spoke to Daily Sun at the State Police Headquarters, Ikeja, said he was importing the arms and ammunition from Burkina Faso. “ I was introduced into the business by one Gbenga. I am a serious smuggler, but I do any other business that comes my way. So,when Gbenga promised to sponsor me to Burkina Faso, I grabbed the idea because no venture, no success. My wife is from Ouagadougou, capital of Burkina Faso, so, I was able to mix up and got connected to one Zakari Watara, who brings in arms and ammunition from Mali to Burkina Faso. So, I would buy from him and import to my country, Nigeria.

“I was able to beat security operatives in Mali by packaging my consignments into milk cartons. Each time I arrived in Paraku town in Benin Republic, I would repackage the arms and ammunition into sacks containing sliced yam (Elubo) and then transport them to Ibadan, Oyo State through Kabo border.

“Well, Gbenga , who introduced me into the gunrunning deal, is the person that introduced Tubosun, who was bringing buyers to me. I don’t care who he brings, I was not investigating, who he was bringing as he gives me my money. I used to buy one AK47 for 600,0000CFA, (equivalent of N200,000) and resell for N320,000. Tubosun is a good guy because he used to pay me cash but I was shocked that he was bringing armed robbers to buy arms and ammunition.”

But his linkman, Tubosun said that he was only bringing hunters to his master. “I am a farmer and a hunter. We are being attacked in the bush by some land grabbers and we use the rifles to defend ourselves.”

The Commissioner of Police, Mr Umar Manko, who paraded the suspects, said based on information he received and subsequent directives he passed onto the officer in charge of SARS, Abba Kyari, one suspected armed robber, Olatunji, was arrested at Subaru area of Ikorodu, Lagos, with one Ak47 rifle. The police boss said that during interrogation, the suspect confessed that he bought it from Amao, a notorious arms dealer in Ibadan.

He said that Kyari deployed a decoy team to Ibadan and Amao was arrested. “He confessed that he had sold several other AK47 rifles and English pistols to many buyers in Oyo, Lagos and Anambra states,” the commissioner said.

Manko assured that efforts were being made to recover the arms from the robbers, who bought weapons from the suspect and arrest the Burkina Faso dealer through the assistance of the International Police.

Continue Reading
You may also like...
Related Topics:nigeria, smuggler, weapon