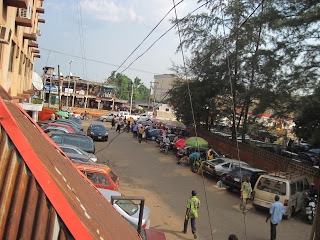 A police officer simply called Corporal Abiola has killed his own child after a violent attack on his wife in Benin city, Edo State.

The attack occurred at Omorogieva Compound on Sam Enobakhare Cresent, Off St. Saviour Road in the Edo State capital.

He was said to have picked the 19-month-old baby boy identified as Ayomide from his bed and bit him severally before strangulating him.

Corporal Abiola was alleged to have pounced on the defenceless baby after his wife, whom he had beaten black and blue, miraculously escaped his aggression.
The policeman who hails from Ijebu-Ode in Ogun State, was said to have impregnated another woman from Oghara town in Delta State.

The 26-year-old mother of the late child, Abigail,while narrating her ordeal, said on Tuesday, March 25, she and her baby were at home with her husband without any dispute, until about 6p.m when her husband’s countenance suddenly changed. She said when she tried to know the reason, he started to beat her.
Speaking in Pidgin English, she said: “He kicked me for belle, pressed my neck, slapped me, I run come out, he come carry my pikin, bite am for neck, belle and face. He come lock me out.”
Recalling in pains how her husband abandoned her at the hospital after having the baby through a Caesarian section, Mrs Abiola alleged that it took the intervention of some policemen at the hospital before her husband paid for her discharge after spending more than a month in hospital.
Abiola’s mother-in-law, Mrs. Jani Omoruyi, said on hearing about the incident, she visited her daughter and discovered that she was battered by her husband who locked her out until after several knocks on his door.
The woman alleged that on entering the house, she saw her grandson writhing in pains on the bed with visible marks on his body, adding, “Abiola say he give the baby medicine because he no well.”
She said the child was swiftly taken to a private clinic where a doctor said the baby was brought in dead, adding that the child has since been buried.
When contacted, the Chief Medical Director of the hospital Dr. Jolly Nosakhare Iguma, stated that a mother and her daughter brought in a dead baby to his hospital few days ago.
“On close examination, the baby was pale, whole body yellowish and with tooth-bite injuries on his face,“ adding “since the baby is not old enough to fight with any person, I wondered who bit the baby.‪”‬
The Edo State Commissioner of Police, Mr. Foluso Adebanjo, said he was yet to be briefed on the incident.