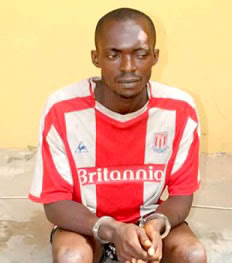 In his confessional statement, Udoma said he works as a panel beater but due to shortage of jobs, he went into robbery to raise the money to pay his son’s hospital bill.

“I’m a car panel beater and I have not done any job for some time now, even when my son became sick and was hospitalised and I needed some money to pay his bill.

“That was what led me into stealing. I broke into my neighbour’s house and stole her Plasma television, but I was caught in the act and the television set was collected back from me.”