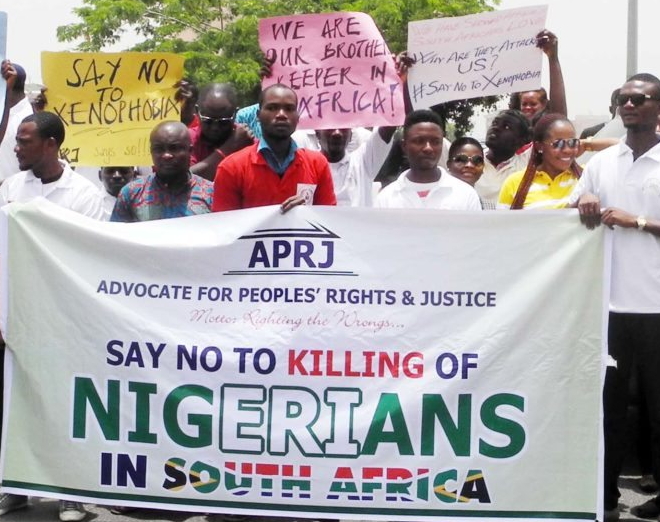 The Xenophobic attacks recent carried out by South Africans on foreigners had long been expected. As early as January, Nigerians living in South Africa were alerted to the possibility of an attack by their hosts.

And, when the South Africans carried out the plot in the early hours of February 24, Nigerians, who had prepared themselves for any eventuality, were spared the loss of lives, which had been their lot in previous attacks.

As he watched the violent attacks on television, Femi, who pleaded that his full name should not be used for security reasons, realised that he and other Nigerians owe their lives to the benevolence of some of their hosts. Femi, who has lived in the former apartheid colony for five years now, said Nigerians now live in fear of attack every day.

Weeks after the latest waves of attacks on foreigners by South Africans, Femi, who trades in accident cars, is yet to get over the trauma of the ugly incident.

Recalling his experience, he said:

“We had information from people close to the South Africans that they were going to attack us.

“They normally say they are going against illegal immigrants.

“The week before the last attack, they came to a mechanic workshop owned by a Nigerian. The place is called Embassy, on Christophel Street in Pretoria. They burnt 28 cars in that shop.

“On 24th of the month, they marched around from Attridgeville down to Pretoria West. During the march, they were destroying and looting shops. It was chaos.

“I stayed in Pretoria West, and I was indoor throughout. I switched on the television to monitor what was happening. The experience was horrible. You can imagine watching people moving round and attacking your people. I don’t pray to go through such experience again.

“At a stage, the immigrants, Ethiopians, Somalians and Nigerians, decided that they would fight back, because even though the South Africans and their police know the drug peddlers and the prostitutes, they still go ahead to attack foreigners who go about their legitimate businesses. “

Femi says he no longer feels secure in South Africa. “I am just trying to get myself together and go back to Nigeria or relocate to a more peaceful country,” he said with a tinge of sadness.

The story was the same for Seye Oladeji. For him, living in Pretoria West in the last 10 years has been a tough decision.

Like other Nigerians, Oladeji survived the latest attack because some friendly South Africans told him of an impending attack.

“I was indoor all through the period of the attack. I have been in South Africa since 2007. I witnessed it in 2008. I know how they are.

“Two houses close my residence and belonging to Nigerians were burnt. It was a really traumatic experience.”

However, despite the trauma and loss foreigners go through in South Africa, he is not ready to quit. With his firm understanding of the country and its people, Oladeji said he would always get by in the midst of the violence.

“Some of us know how to go around when they are doing all these. I get by,” he said with a sense of assurance.

“I don’t really know why these people are doing this to us. We go about our businesses legally, but they are envious of our achievements and they want to kill us,” Emmanuel said.