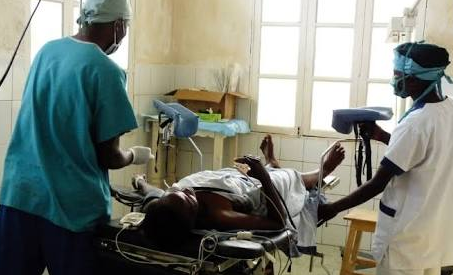 January 17, 2017 – Ibadan Man Accused Of Removing Wife’s Womb During C-Section Says Doctors Did It To Save Her Life

Last week Thursday, a woman asked an Ibadan Customary Court to dissolve her five-year-old marriage because her husband rendered her barren by conniving with doctors to remove her womb without her consent.

“My lord, Musiliu has systematically rendered me barren, because I can no longer conceive due to the removal of my womb during a caesarean surgery when I was trying to deliver my first child.

“While in the hospital, he should have informed any of my relatives that for me to have a safe delivery, my womb must be removed.

“It is not until recently that Musiliu wanted to be having sexual intercourse with me that he directed me to go for family planning.

“Then, medical personnel told me that I no longer have womb.

“Worst still, Musiliu is a drunkard and insensitive in all aspect of life,’’ Kafilat told the court, sitting in Ile Tuntun area of Ibadan.

However, Musiliu Raji, who opposed the divorce, did not deny the allegation levelled against him, but pleaded with the court to help keep his relationship with Kafilat.

“My lord, it is true that her womb was removed but the doctor informed me that her womb had already been damaged and the only option was total removal for her safe delivery.

“The doctor also advised me not to let her know until over a year when she could bear the pain,” said Musiliu who lives with Kafilat at Ologuneru area of Ibadan.

Dissolving the marriage, the court president, Mr Henric Agbaje, held that it was clear that there was no more love between the couple.

He awarded custody of their four-year-old son to Kafilat and directed Musiliu to provide N4,000 monthly allowance for his upkeep, in addition to being responsible for the child’s education.