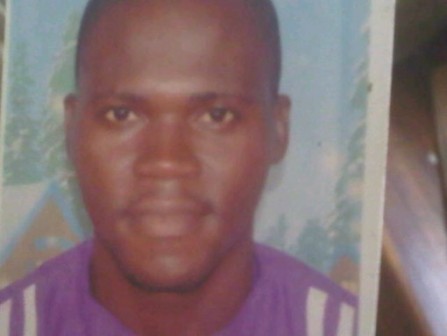 He confessed that he did so to raise money to pay his pregnant wife medical bill who recently delivered a baby boy.

The Adamawa state-born Elisha was arrested at Mosalasi bus stop, Egbeda area where he mounted the road block causing traffic gridlock and forcefully extorting money from motorists and motorcycle operators.

While he was carrying the illegal extortion, a patrol team from Area M Idimu command apprehended him and asked to know why he was doing so.

He introduced himself as a mobile policeman and presented a police identity card which was later discovered to be fake.

On preliminary investigation, the team discovered that he was not a police man and subsequently arrested and took him to the command.

He confessed that he was not a police man, saying he made his papers in WAEC exam with credits and applied to join the airforce and police but did not make the cut.
He said he decided to come to Lagos six years ago to set up a business but again was unable to do that due to fund.

He said he decided to impersonate and was using it to extort from motorists before he was arrested.
On the day he was arrested, Elisha said what prompted him to embark on serious extortion was that his wife delivered and there was no money to pay their medical bill and feeding.

According to police, Elisha was caught wearing mobile police uniform, identity card and warrant and was using it to extort money from motorists and motorcycle operators.

He was charged to court for the alleged offence on a three count charge under the Criminal Code.
He pleaded not guilty.

The presiding magistrate, Mrs J.O.E Adeyemi granted him bail with two sureties in like sum.

He was remanded in prison custody at Kirikiri pending when he perfect his bail condition.
The matter was adjourned till 5 December 2015.