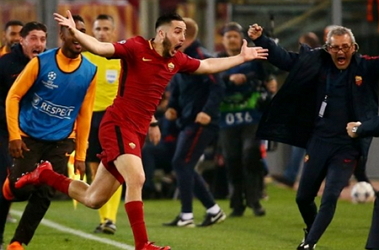 A young man has killed himself in Ilorin, the capital city of Kwara state.

The 25-year-old reportedly took his live by hanging himself on a ceiling fan in his apartment.

He was said to have lost out in a betting over the outcome of a European Champion League match.

The incident was said to have occurred in Oko-Erin area of the town after the return leg match between FC Barcelona of Spain and AS Roma of Italy played in Italy.

He was said to have bet that Barcelona who were leading by 4-1 in the first leg played at Nou Camp, Spain would maintain lead at end of the return leg and b through to the semi-final of the championship.

However, the match turned out to be 3-0 in favour of AS Roma making the aggregate result to be 4-4 with Roma qualifying for the semi-final at the expense of Barcelona by virtue of away goals rule.

The result made the deceased to lose the motorcycle to his opponent in the bet as the opponent reportedly smiled home with the bike from the viewing centre at the night immediately after the match.

The man was said to be downcast with the loss of the motorcycle as some said he used it for commercial purposes and that it was his main source of livelihood while some others said it was someone else and not him the owner of the bike and that he only had it in his custody on behalf of the owner.

It was learnt that not being able to recover from the trauma, the man resorted to committing suicide by hanging himself.

An eyewitness who said not many people was aware of the incident disclosed that the development devastated the deceased’s Igbo kinsmen in the area who lamented the action of the man.

He said it was not in connection with Match bettings.

Okasanmi explained that report with him indicated that the man committed the suicide because of huge debt hanging on his neck saying “the man was said to have incurred debt here and there.”