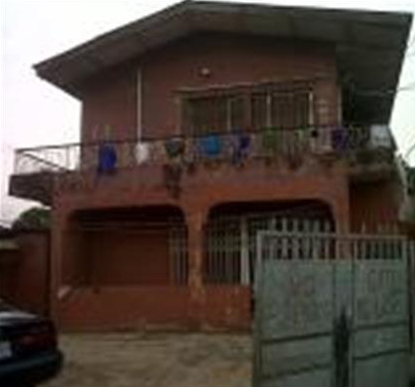 A middle-aged woman is currently recuperating in a Lagos hospital, after robbers stormed her rented apartment on the Lagos Island, during which she stabbed one of the assailants to death.

According to PUNCH Metro, the woman, identified simply as Adenike, and her family were attacked on Tuesday at about 2am on Eyin Iga Street in Itire Surulere Lagos.The robbers, who were armed with knives and cutlasses, reportedly gained entrance into the house after damaging the gates.

It was learnt that when the robbers got to Adenike’s apartment, there was a struggle during which one of the robbers, identified as Quadri Iginla, cut her with a knife.

Adenike was said to have wrenched the knife from Iginla, and stabbed him in the stomach.The robbery suspect reportedly lost balance and fell off from the two-storey building.

Neighbours, who learnt of the robbery, were said to have alerted the police from the Adeniji Adele Division.The other suspected robbers reportedly escaped after the police got to the area.

The policemen were said to have rushed Iginla, who was unconscious, to the Lagos Island General Hospital, while Adenike was also taken by her family to a private hospital.

When our correspondent got to the area on Thursday, it was learnt that Iginla died in the hospital.
Speaking with PUNCH Metro, Adenike’s husband, who declined to give his name, said the robbers injured his wife in the hand with a knife, adding that there was a struggle during which Iginla was pushed off the building.

He said, “We cannot confirm the number of the robbers. They entered my apartment at about 2am. One of them injured my wife in the hand and there was a struggle. As this went on, other people called the police and a patrol van was sent to our street.
“The robbers quickly fled from the house. One of them, who had sustained a knife injury, fell off the staircases. The policemen took him to a hospital for treatment.”

A police source told our correspondent that Iginla was not attended to at the general hospital for lack of a vacant bed. He added that the robbery suspect died at a health center on the Adeniji Adele Road.

He said, “The police patrol team responded to a distress call on the street at about 2.30am. A male robbery suspect, Iginla, was found injured. The suspect and others, who are still at large, allegedly entered Adenike’s room. While making away with possessions, the woman overpowered one of them, and stabbed him in the stomach.

“She was also injured in the hand. During the struggle, others escaped, but the robber fell off the building. The police took the suspect and the victim to the hospital.”

A resident, who spoke on condition of anonymity, told our correspondent that Iginla’s girlfriend showed up at the police station, and wanted to know where he was being treated.

He said, “No one in the area knew the identity of the injured robber. His girlfriend showed up at the station, and was asking the police to let her stay with him, but they did not allow her.”

Our correspondent gathered that the knife had been recovered, while the case had been transferred to the State Department of Criminal Investigation.

Continue Reading
You may also like...
Related Topics:iginla is dead, is prophet iginla dead or alive