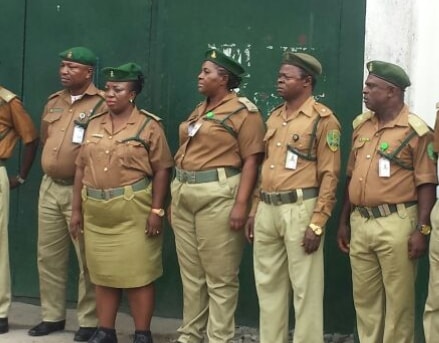 The long arm of the law has caught up with Mr Wale Iseagba, a senior administrative officer with the Nigerian Prisons Service after he was caught selling cocaine drug to inmates at Ikoyi Prison.

After a week long monitoring, he was nabbed on Wednesday morning. Before his arrest, his lifestyle, which suggested that he was living above his income, aroused the curiosity of his colleagues, who then complained to higher authorities.

Saturday Sun learnt that in-house trading in illegal substances is viewed as a serious offense within the prison community. Further checks revealed that the case involving the Provost was also brought to the knowledge of the authority by an aggrieved inmate, who felt cheated, as he was initially part of the racket before he fell apart with the Provost over sharing formula of the proceed.

Having spilled the beans, insider sources further told our reporter that, a trap was set for the Ogun State born officer, and he walked into it, as he was caught red handed with the illegal substance preparing to hand it over to an inmate who would sell it for him.

A senior prison official arrested him, thereafter, an orderly room trial was carried out following a prolonged interrogation. He was handed over to the National Drug Law Enforcement Agency (NDLEA) at its Shaw Road office, Ikoyi, where he has since been detained.

The suspect who wept openly did not implicate any other officer, but only pleaded for leniency. However, Saturday Sun investigation revealed that two other prison officers and one inmate have been arrested and handed over to the anti-narcotics agency.

A senior prison controller, who pleaded anonymity, confirmed the development, adding that investigation is still on going.