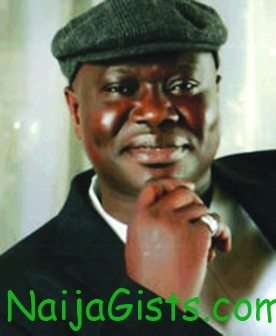 June 6, 2012 – Ikuforijimi: I Was To Board Crashed Dana Aircraft

Lagos State House of Assembly speaker, Adeyemi Ikuforiji has a lot to thank God for as he was supposed to board the ill-fated aircraft belonging to Dana Air, which crashed into residential buildings on Sunday evening. naijagists.com

The Speaker, who gave his testimony at the floor of the new Assembly chamber when a lawmaker, Dayo Fafunmi, raised a motion relating to the crash, told his colleagues that he was supposed to take the flight from Abuja, where he had gone to attend a meeting of the Conference of Speakers, to Lagos, first thing Monday.

One of his aides, he said, even travelled from Lagos to Abuja on that Sunday with the same plane and it was while the plane was returning to Lagos that it crashed just few minutes to landing at the Murtala Mohammed Airport.

“It is unfortunate that people’s lives mean nothing to us in this part of the world.

“In fact, one of my aides, Bolaji, who went ahead of me yesterday (Sunday), took that aircraft to Abuja and it was on the return leg to Lagos that it crashed.

“That same aircraft was the one I would have boarded this morning (Monday) because I asked him to book a flight for us to get back to Lagos today (Monday) and he went and bought tickets for Dana flight for me and my aides, including himself.

“But by the time he returned from where he bought the ticket, the aircraft had crashed. But of course even those who sold the tickets didn’t know. I got the news that the Dana aircraft crashed in Lagos,” Ikuforiji said.

Continuing, he asked: “What are we doing down here? Do we really have governments that are interested in protecting lives and properties of Nigerians?

“The road between Lagos and Ibadan is worse today than I knew it 10 to 15 years ago; the road from Shagamu to Benin is worse than it was 20 years ago…are we progressing, despite making more money and not knowing where this money goes?

“We have regulatory authorities that are busy regulating what comes to the pockets of those to regulate things that affect our lives.

“If we fail to fix roads on which we can move our cars, the air roads that God gave to us freely with one of the best weather conditions in the world, is also giving us challenges because we do not keep to the rules.

“This aircraft already got to Lagos and the passengers would have heard, ‘fasten your seat belts,’ we are approaching before the incident happened.

“Just think of the last few minutes of those who died simply because somebody refused to do his job. This is just sad!”

Ikuforiji, who said he had become scared since the incident, added that he was sure there were older aircraft still flying in some countries because they are adequately maintained.

The Speaker said: “Aircraft are built to run for years. The engines are mechanical but you don’t want to compare them with your cars.

“Most of the cars brought into Nigeria are Tokunbo that have been used 10 to 15 years over there and when they are bought by us, we celebrate them and they look good, and we use them for a short while, then the problem starts.

“It is the same thing with the aircraft. If you don’t maintain what you have properly, none of these mechanical items are made to last a lifetime.”

He however lamented the poor rescue efforts of government officials during cases of emergencies and their poor facilities which make them rely on companies like Julius Berger.

“NEMA does not even have small helicopters that could fight fire.

“The Minister of Aviation said there was a mayday call and I asked why they didn’t respond immediately. We allowed them to get roasted just like that.

“You will hear rumour, from the near truth to the ridiculous and I wonder why the people didn’t speak out before the incident if they truly knew all these.

“I keep wondering why we are here, because it is virtually everything that we do wrong and when you do anything right, it appears that is a mistake,” he said.(culled from pm news)

Continue Reading
You may also like...
Related Topics:aircraft, board, crashed, Ikuforiji, lagos speaker