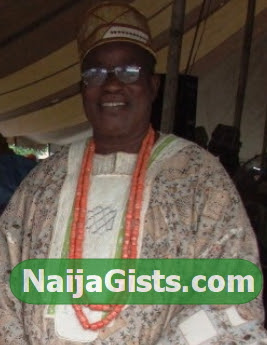 Ilesanmi Olorigbo, a popular chief from Aita quarters of Ilupeju-Ekiti, in Oye Local Government Area of Ekiti State, has been reportedly stripped naked and paraded round the town for allegedly stealing a cell phone.

He was also forced to commence a hard labour of digging a deep well inside the community market, a source revealed on Monday.

It was learnt that the ugly incident took place on Sunday when some youths in the community were tipped that a missing cell phone was found on him.

The matter was reported at the palace of Apeju of Ilupeju-Ekiti, Oba Olaleye Oniyelu, where palace guards were sent to get Olorigbo.

“On getting to the palace, the Olorigbo was promptly searched and behold! The missing cell phone was found inside his pocket. Apparently, he was caught unawares as he did not know what the Kabiyesi had wanted from him,” the source said.

Another resident of the town, who witnessed the incident but pleaded anonymity, told newsmen that the Olorigbo had also begun to dig a deep borehole inside the Oba’s market at the centre of Ilupeju as community service to atone for his crime.

“He would first clear the bushes around the spot and thereafter begin to dig the well, the well must bring crystal clear water, else, his punishment won’t be complete. This will serve as deterrent to other would be thieves in the community.”

But Oba Oniyelu denied that Olorigbo, was stripped naked and compelled to dance round the town over alleged theft of a cell phone.

The monarch in a telephone chat said he was in the hospital when Olorigbo was brought to the palace and that the matter was reported to the police by his wife.

“Olorigbo calls himself a chief, he used to perform rituals and he is the leader of those praying at one of the shrines and anybody whose hand is not clean cannot go there. The adherents of the deity said he will be removed. That is what I know.