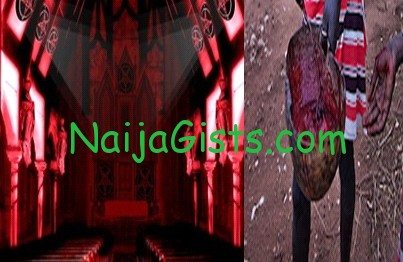 A 16-year old girl in Bulawayo, Zimbabwe has made a shocking confession to being a member of a secret Satanic cult that feed on human flesh and drinks human blood. naijagists.com

The 16-year old girl shocked residents when she released the names and addresses of 38 people killed by her cult in the area.

The 16-year old satanist even gave out the names of 60 people who she worked with which include leaders of a popular church in Cowdray Park area of Bulawayo.

She further released the address of a house with an underground room where corpses were kept for Satanists to feed on.

According to DailyPost Kenya report, Mr Stanley Kwashira, the organising secretary of the residents association in Cowdray Park, yesterday said he was still grappling with the “shock of the horror tale.”

“She came to my house with her mother and two members of the residents association in her area last week. She said she was recruited to the group by a 32-year-old man (name withheld), who was her boyfriend. I was ready to dismiss the tale as fabrication of an over-active teenage imagination when she started naming people who we knew had died in the suburb, accurately giving dates of death and addresses,” said a stunned Mr Kwashira.

The girl joined the Satanic cult at age 15.

“She said she was in love with a man in the area and one day in June last year, she collapsed as she was going to the shops. She said two men, including the boyfriend, then took her to a house near the bus stop popularly known as the sign post. She said there is an underground room where she went through an initiation process, which included drinking human blood and eating the flesh of dead people,” said Mr Kwashira.

He said the girl revealed that there were about 60 Satanists in the suburb who used to meet at the house.

“She gave names that I am still finding hard to believe. She named some leaders from the Seventh Day Adventist Church in Cowdray Park. The girl said the Satanists could become invisible and drain blood from a living person in broad daylight. She said the victims would start feeling weak and go to sleep while the unlucky ones would die,” he said.

Mr Kwashira said the girl told them that she had an invisible basket that she used to fly to rural areas with the cult to “drink from healthy” rural people.

“She said at the last rural raid which lasted about three weeks, last month, her colleagues kicked her out of the group saying it was no longer possible for them to work with her. They said someone from her family was making strong prayers on her behalf, which were creating havoc in their working environment,” he said.

Mr Kwashira said residents leaders needed to engage the police and raid the houses where the girl said Satanists lived.

“She said human blood is the best tasting drink she has ever had. These people were abusing this child. We should get the police and a certified prophet or inyanga and raid those homes. We cannot have killers living among us,” he said.

When Chronicle visited the suburb yesterday, the girl said her mother had instructed her not to speak to anyone on the matter.

When this reporter called her mother, she said she was in Harare and would only grant a face to face interview last night or this morning. Contacted for comment, Clr Ndhlovu confirmed the incident.

“Yes, the matter has been reported to me. It is still not known to a majority of residents. We should handle it tactfully because it has the potential to create a bloodbath in the suburb,” said Clr Ndhlovu. He said it was frightening to hear that there were people who were eating other people in the suburb.

“The matter was reported to the police last week. Today, I am going to the police to work out a way of solving the issue without raising tempers. I also think the people who were mentioned should be investigated and their houses searched,” said Clr Ndhlovu.

Police spokesperson for Bulawayo Inspector Mandlenkosi Moyo could neither confirm nor deny the incident.

“We will give you the information as soon as we get it,” said Insp Moyo.