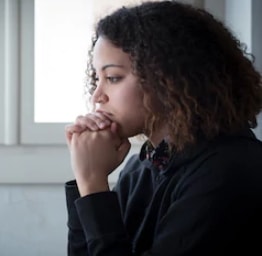 I  am at the brink of a serious depression and I really need help because my past just caught up with me and it is frightening!.

Please before you judge me harshly,  read my story.

I graduated three years ago after struggling hard for five years in the university. I got admission a year after secondary school only for my dad to die after my first semester.

Things became terrible after this as my mother was not even working. My two other siblings were in secondary school. It became hard to study, because I could barely afford even the necessities.

In my second year, I failed four courses because I didn’t buy handouts! I was devastated. I met Mr. Olaiya. (Not real name) He gave me a lift and we got talking…when he dropped me, he gave me his card and 10K.

Well, that was how it started. He helped me all through school. Even when I had an extra year. I did not have a boyfriend.

A Year after service, I met Olumide and I fell in love with him. My relationship with Mr Olaiya ended amicably during my final year in the university.

Olumide and I have dated for two years. He finally introduced me to his parents last month when he returned from one of his numerous trips! I saw his father, he was Mr Olaiya.

He recognized me, hugged me and was pleasant all through my stay. His mom was also very nice to me.

I got home and cried my eyes out! I swear, I was a good girl. …I didn’t even date another guy while I dated Mr Ola, he deflowered me.

I told myself it was over between I and Olumide. I planned to just break up with him until I missed my period again, this month…making it two months in a row!

I am devastated. Mr Olaiya did not call me, has not told his son, but I can’t marry Olumide! I am pregnant two or three months, not so sure… How best can I handle this?

Continue Reading
You may also like...
Related Topics:boyfriend, pregnant, son