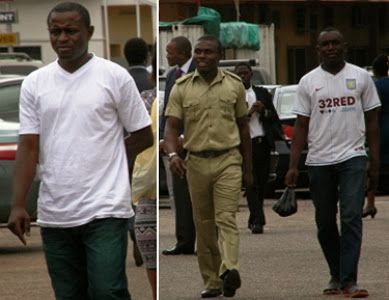 2 young fraudsters Tobechukwu Igbokwe (Alias David Prince)and his accomplice Ifeanyi Obi who are alleged to have duped an America of $40million are to remain in prison until December 3, 2013. Justice Lawal Akapo of the Lagos State High, Ikeja on Monday October 28, 2013 remanded the duo in prison custody after they were arraigned by the Economic and Financial Crimes Commission on a 12- count charge bordering on forgery, conspiracy and obtaining money by false pretences contrary to section 8(a) and 1(3) of the Advance Fee Fraud and Other Fraud Related Offences Act No 14 of 2006.

Specifically, Igbokwe, 19 year-old secondary school leaver, was alleged to have severally duped his victims, many of them foreigners of huge amounts of money through the internet under fraudulent guises. He allegedly worked in concert with Obi to dupe an American, Micheal Silva of $40 million in an inheritance scam. Silva was made to believe that Igbokwe and his accomplice had a huge inheritance which they wanted to move to a foreign account for safe-keeping.

The victim was asked to send money to “process” the transfer and in the process, he wired $40m in several installments through Western Union Transfer to Igbokwe and Obi.

Igbokwe also confessed that he had duped other foreigners among them a Tommy Bedwell- who lost $6,000 to him and Richard Hunt-$15,000.

When the charges were read to them, the defendants pleaded not guilty.
EFCC counsel, Fadeke Giwa prayed the court for a trial date and to remanded the accused persons in prison custody.

Justice Akapo, however, adjourned the matter till December 3, 2013 and ordered that the defendants be remanded in Kirikiri Maximum Prison, Lagos.