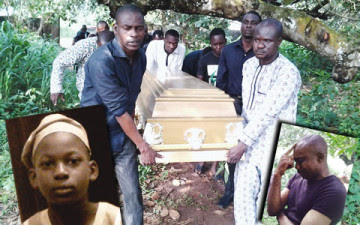 Tears flowed freely at Ijede Cemetery, Ikorodu, Lagos as family members and sympathisers gathered to bury the remains of Timilehin Ebun, a nine-year-old boy killed by a police bullet.

PUNCH Metro had reported that the boy and members of his immediate family were on their way to their Ikorodu home when a stray bullet pierced through his father’s vehicle and killed him.

Our correspondent, who was present at the funeral, observed that the deceased’s siblings were not at the cemetery. However, cousins and friends of his parents were present.

Earlier, the relatives had collected Timilehin’s corpse at Lagos State University Teaching Hospital, where an autopsy was performed on it.

Symapthisers at the funeral, which started around 3pm burst into tears when the deceased’s coffin was opened for them to see.

The corpse was clothed in a white and blue shirt and a pair of jeans.

The presiding minister, Pastor Banjo Lawrence, said although the incident was tragic, it was pertinent that people should see it as proof that anyone could die at anytime.

He therefore urged all to live right before God because both old and young would die. He however prayed that such a tragedy would not befall the family again.

He said, “It is most unfortunate that the boy was killed so suddenly and at such a young age. I pray that God will console the family and none of the remaining children shall die young.

“We all need to remember every day that we shall all die one day. We should therefore endeavour to live right before God.”

The most emotional aspect of the event was the lowering of the coffin into the grave, after which cousins of the deceased were called upon to perform the dust-to-dust rites.

One of the cousins, Abiodun Ebun, cried profusely. Abiodun said he never imagined that he would be the one to bury Timilehin, who was many years younger than him.

He said, “This is very unfortunate. Timilehin was just too young. How could I be pouring sand on his coffin? God, why? The boy was not sick; he just went to pick up his brother from the airport and was killed in the process? I hope Jide, who just came back from Canada does not start blaming himself over the incident?

“This death was completely avoidable and yet it happened, just like that.”

Employees of Timilehin’s father, described the deceased as a pleasant boy who always followed his father to work.

One of the employees, who did not identify himself, said, “Timilehin was such a good boy, it is hard to believe that he is gone. He usually came to the office with his dad and they were inseparable. I wonder how the man will survive without him. It is just too sad.”

A copy of the death certificate made available to PUNCH Metro reads in part, “Timilehin died of exsanguination (bloodlessness), disruption of facial vessels and gunshot injuries to the face.”