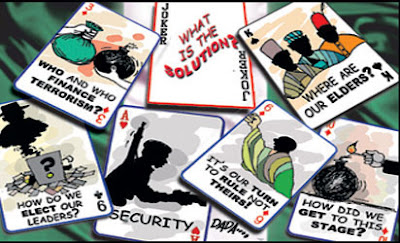 If there is anything Nigerians are best at, it is the ability to pretend. Nigerians have globally claimed the first position in the art of pretence. After all there is no sphere where Nigeria or Nigerians can come first, and so why not pretence in the field of behavioural sciences. In sports scientific inventions, space exploration, military warfare, communications, military arsenal etc, Nigeria will be assured of coming last on the table. This is because Nigerians will always see a white material and call it black, and vice versa.

It is now well enshrined in our culture and tradition to shun the truth and go for falsehood.

If not, why can’t we call a spade by its name and tell the North to its face that they are responsible for the insecurity that has engulfed the whole nation?

Perpetrators of this national calamity have openly accused the northern elite of sponsoring this dastardly national insecurity. A recent confession by one of the perpetrators even revealed that seven governors and two former Heads of State are their sponsors.

For instance northern governors have all been accused of sponsoring this national insecurity with a monthly donation of N10 million. The Bauchi State Governor was specially mentioned as being a great fan of the perpetrators of insecurity because of his admiration for their bravado and their methods of beheading fellow Nigerians. Of course, this revelation is not surprising as we know that the Bauchi State Governor is the son-in-law to Hajia Turai Yar’Adua who gave up struggle for the Presidency only after her husband’s death.

The Northern governors especially those of the North Eastern and Northwestern flanks have been very silent and reticent about the insecurity now plaguing the country. Even though Niger State is not in any of the two geopolitical zones mentioned earlier, it harbours one of the greatest kingpin’s and sponsors of these callous killers who have sworn to make Nigeria ungovernable for President Goodluck Ebele Jonathan. The strategy of the Northern Governors is part of a grand Northern design to frustrate and emasculate all the President’s energetic input into the development of Nigeria.

No Northern governor has forcefully come out to condemn the carnage now going on in the country. They cannot because how can one condemn one’s pet project. They cannot condemn the spillage of blood going on in the country because the victims are mainly Christians from Southern Nigeria. The Northern governors are cocooned in their executive safety while innocent Christians, including National Youth Service Corps members are being slaughtered even to the secret sinister delight of some of the governors.

These governors conveniently blame the nation’s insecurity on President Goodluck Jonathan when they have not been able to contribute even in the least solution to the problem. If truly they are the Chief security officers of their states, they should be seen to have lived up to their maximum capacity before looking up to the President of the Federal Republic of Nigeria and Commander-In-Chief of the nation’s Armed Forces.

But what have these Northern governors done apart from passing secret funds and messages to the perpetrators of this unpardonable treasonable felony. Some are forced to join this sordid and shameful disservice to father land because of fear that they might be targets of these blood hounds.

The truth of the matter is that it was planned for hell to be let loose if President Goodluck Ebele Jonathan won the Presidential election on 16 April, 2011. For instance another governors forum formed in 2010 during the campaign prior to the 2011 election was the G-3 which was a coming together of the three governors of Sokoto-Alhaji Aliyu Magatarkada Wammako, Adamawa-Alhaji Murtala Nyako and Jigawa-Alhaji Sule Lamido.

The three governors who called themselves “self-enlightened neutralists” made some efforts to break the impasse that confronted the Peoples Democratic Party prior to the PDP primaries to elect a viable candidate for the 2011 Presidential elections. Spokesman for the G-3 Alhaji Sule Lamido left no one in doubt as to what the North had up their sleeves if President Jonathan won the 2011 elections. Governor Sule Lamido said: “The PDP, no matter what, must unite, must reconcile because the consequences could be very dire if we are divided. If we do things wrongly we could win and plunge the government into crisis”. Governor Lamido went further to say, “Does Jonathan hope to defeat IBB, Atiku, General Gusau and Bukola Saraki in the PDP primaries and then go on to defeat General Buhari (making two former Heads of State, one former Vice-President and a two-time former national security adviser) and hope to exercise power peacefully?”

Governor Lamido’s statement made in November 2010 is very pregnant with meanings. He questioned the wisdom of Jonathan’s ability to govern peacefully after defeating two former Heads of State, and a two-time NSA. On 2 October, 2010 the former civilian governor of the old Kaduna State Alhaji Lawan Kaita set the ball of antagonism and insecurity rolling when he threatened that North will make Nigeria ungovernable of President Goodluck Jonathan becames president in 2011.

Unfortunately Nigerians have conveniently forgotten all these treasonable statements. But also very discerning Nigerians know that these Northern elites are the big faceless brains behind these dastardly bombings and atrocious murders.

At this point, it is necessary to remind ourselves of the great patriotism and courage shown by the late Alhaji Abubakar Rimi who was then the People’s Redemption Party Governor of Kano State in 1980, during the maitasine menace. Governor Abubakar Rimi became worried of his state’s security status as the Alhaji Shehu Shagari government at the centre did not show any interest in the arson and mindless atrocities in Kano State due to political differences. Governor Rimi then summoned the Brigade Commander to his office to brainstorm on the crisis ridden situation in Kano. It was then decided that the Brigade Commander should make an urgent appeal in writing through the Governor to President Shagari who had previously shunned Governor Rimi’s endeavours. President Shagari obliged and in a day’s operation the military massively invaded maitasine’s hideouts, killed maitasine and some of his assistants. And till date maitasine has never reared its ugly head again.

Our northern governors should emulate the late Governor Abubakar Rimi and show patriotism and love for fatherland by stamping out this odious malaise in our midst once and for all.

I vehemently disagree with those northern leaders who are trying to mislead Nigerians by sourcing for other reasons for Nigeria’s insecurity problems.

General Theophlus Danjuma believes that Nigeria’s security problems are as a result of socio-economic problems in the North while Nigeria’s United Nations’ under secretary Dr. Ibrahim Gambari further states that our security problems are caused by greedy politicians, ignorance and social deprivations. Dr. Gambari must be told in very clear terms that there are greedy politicians in the south too and they have not caused the nation a security breach of this magnitude. There is social deprivation and ignorance all through southern Nigeria and this has not led to the ethnic cleansing taking place in the North.

These northern leaders know the truth, they know that the security problems in Nigeria are as a result of the failure of the North to rule Nigeria perpetually because of dubious census figures which make evidently sparsely populated northern rural areas count even more than heavily populated southern cities.

It is the fundamental human right of every Nigerian child to aspire to leadership in Nigeria. The Nigerian Presidency is not the birth right of the Northern politicians alone. Northern Nigeria has ruled for 39 of Nigeria’s 52 years. Other geopolitical zones of the country should be given a chance to rule too.

Let us all join Professor Bolaji Akinyemi, the erudite scholar and foreign affairs specialist who pleaded with Nigerians to allow President Goodluck Jonathan to rule this country peacefully.

There is great hope for this country. Let us love Nigeria and not destroy it.

Nigerians Beware Of Bogus Seminars !
Nigerians Are The Most Sexually Satisfied In The World – Survey