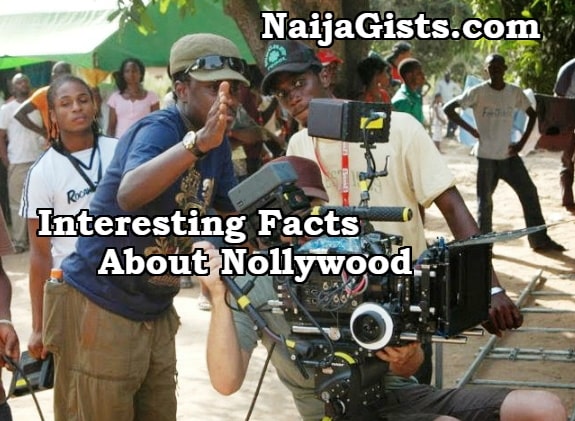 You all probably know the Nigerian movie industry as “Nollywood“, but how much do you know about the movie industry? I bet you don’t know much! In this article, we will be bringing you Nollywood quick facts and figures; including its history, monetary value, size and every other key piece of information you need to know about the biggest movie industry in Africa.

So, if you are a Nollywood fan, this piece will get you adequately enlightened on how the movie industry came to being and what it actually entails.

When Was Nollywood Founded?

The foundation of what makes up Nollywood today was laid as far back as the early 1960s (some 60 years ago), which coincided with the early years of Nigeria’s independence. At this time, prominent filmmakers/theatre artistes like Hubert Ogunde, Ola Balogun, Eddie Ugboma, Moses Olaiya and many more were the leading figures in the Nigerian film arena.

They were highly revered personalities in the movie world, and together, they strived to create a unified structure, which later metamorphosed into what is known as Nollywood today.

Although, no one truly knows the first person to use the term “Nollywood”, the idea behind it is a blatant imitation of the leading movie scene in the world – Hollywood.

For the next 25 years after the Nigerian film industry was created by the grand pioneers, most productions centered around drama, stage performances and cinema movies. The first actual home video in Nollywood was not produced until the early 1990s, precisely in 1992, with the release of a movie titled Life In The Slum.

The movie was funded by Kenneth Nnebue, who was a prominent electronics marketer at that time. It was shot for about 30 days and it reportedly cost around $12,000, which was a lot of money during that time.

With the success of this movie, subsequent home videos were  produced, and today, Nollywood has grown to become one of the largest movie industries in the world.

How Much is Nollywood Worth?

Nollywood has grown significantly over the past 20 years or thereabout. Today, the industry is one of the top grossing movie industries in the world, with billions of dollars in revenue.

It stands head and shoulders above all other movie industries in Africa. And at the global stage, it is second to only the American movie industry, which is famously tagged Hollywood.

As at 2018, Nollywood has an estimated worth in the region of $5.3 billion. Although, the actual worth has been a subject of the debate over the past few years, the valuation is very much within the range of the estimated figure ($5.3 billion).

According to recent estimates, the Nigeria movie industry ranks second (behind Agriculture), on the list of largest employers of labour in the country. The industry reportedly contributes about 4% to 6% of the Nigerian gross domestic product (GDP).

Is Nollywood Bigger Than Hollywood?

This sounds awkward right? Well, in certain contexts, it is actually a fact – Nollywood is bigger than Hollywood. However, in terms of worth and prominence, Hollywood is light years ahead of its Nigerian counterpart.

All key indices flow in direction of Hollywood, against Nollywood. For instance, a standard movie in Nollywood has a budget in the range of $20,000 to $50,000 (8 million to 20 million Naira), while a short movie (less than two hours) in Hollywood can have a budget as high as $10 million. In fact, a seasonal movie could cost hundreds of millions of dollars.

Furthermore, the difference in the quality of movies produced by both industries is glaring for all to see. However, the low budget of Nollywood gives it one obvious advantage over her superior American counterpart: the relatively higher annual production volume.

How Many Movies Does Nollywood Produce Annually?

On average, the Nollywood produces 1200+ movies per year, which is the highest of any movie industry in the world. This figure is not surprising, as a typical Nollywood movie is produced and shot within the space of two weeks. Also, the relatively low budget means actors are always engaged all-year round, as movie producers can easily pay them for a short-term work.

Fewer productions would obviously translate to better quality, as the budgetary allocation for each movie would be reviewed upward. However, the status quo is not changing any time soon. In fact, production is even on the rise, and in few years time, Nollywood might be producing as many as 2000 movies per year.

How Much Do Nollywood Stars Make?

Don’t be deceived by the flashy “Instagram lifestyle” of most Nollywood stars, most of them have nothing to show for it in real life. In fact, only a handful of them, the so-called A-list stars, are multimillionaires.

A typical Nollywood movie is produced and directed within two weeks, with a budget of about 10 million Naira. If such movie has a cast of 15 actors, how much do you think the highest earning actor can get? This is the reality!

While certain Nollywood stars like Omotola Jalade, Genevieve Nnaji, Desmond Elliot, Ramsey Nouah and others are highly paid, others are left to share the crumbs. It was gathered that, Omotola Jalade earns between 1 to 3 million Naira per movie, and that is as much as any other Nollywood artiste can get.

The so-called A-list stars, who earn millions, make up a tiny fraction (the elite) of the over 1000 movie stars in the industry. Among these stars, there are those who earn below 30,000 Naira (per movie feature) or even less. This is very common in the local (Yoruba/Hausa/Igbo) movie scenes of Nollywood.

In a nutshell, Nollywood is just like a typical ecosystem; the stronger animals (A-list actors) get the larger percent of the share, while the weaker animals (rookies) are left with little or nothing.

Where is Nollywood Located in Nigeria?

Unlike Hollywood, which is a town in the US, Nollywood is not a geographical location. However, in practical terms, the hub of all Nollywood activities is no other location than the coastal city of Lagos, which is located in the southwestern region of Nigeria.

Lagos is the undesignated commercial and entertainment capital of Nigeria. And virtually all the players in Nollywood (and the entire entertainment scene) reside in this city. The city is home to all prominent production and distribution companies in the country.

Is It True That Nollywood Actors Make More Money Than Actresses?

This claim is unproven; in fact, from all indications, it is the other way round. The richest and most popular Nollywood artistes today are the actresses, pioneered by the likes of Genevieve Nnaji, Omotola Jalade Ekeinde, Mercy Johnson, Funke Akindele and the likes.

The richest actor in Nigeria, according to credible sources, is Desmond Elliot, with a net worth of about. However, his political career in the past four years, has earned him more money than his 15+ acting career.

In a nutshell, the actresses take the lead in, not only prominence, but also in wealth (movie earnings).

How Do Nollywood Producers Make Their Money?

Movies, like every other service and product, is meant for the end consumer – the general public. “Movie producer” is the technical term used for every professional that makes an input to the makeup (storyline) of a particular movie. This is why a typical movie often has many producers.

However, there is always the lead producer; the one who actually owns the movie. This lead producer is usually the one who covers the cost of production, and like every investment, how much he/she earns is wholly dependent on the ROI (return on investment) of the movie.

In essence, a top-grossing movie translates to huge profit for the producer, while a low grossing movie means little profit or loss. This is irrespective of how much money was pumped into the production of the movie.

A typical instance is Genevieve’s most recent production titled Lionheart, which was acquired by Netflix for over $3 million. What this means is that, Genevieve earned $3 million on a movie whose production couldn’t have cost more than $50,000. That is a staggering 6000% gross earning for the star actress/producer.

On another day, for another producer, on a different movie, the value could be considerably lower or significantly higher.

Feel free to ask any question using the comment box below.

Continue Reading
You may also like...
Related Topics:How Much Do Nollywood Stars Make?, How Much is Nollywood Worth?, how nollywood producers money, Is Nollywood Bigger Than Hollywood?, Nollywood Actors Make More Money Than Actresses?, nollywood location in nigeria, Nollywood Quick Facts And Figures, when was nollywood founded