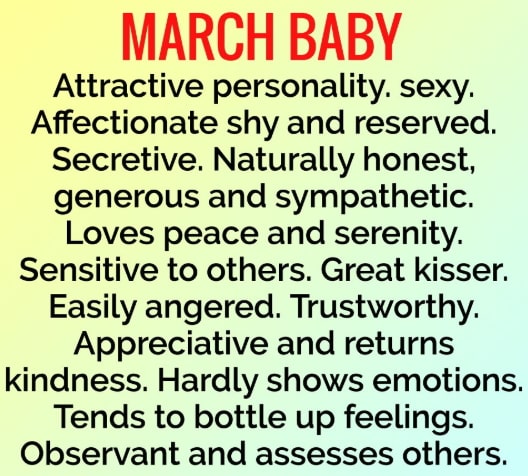 The month of March is one super month. March is the third month and it comes right after the rush of the new year. The month may not be all glamorous but, it does help us evaluate our goals for the year and check if we’re on track.

Surprisingly, the month records a large number of births. Generally, March born people are charming and happy people. They are talented and can use their intuition to perform great wonders.

March babies are born cute and sweet. Here are some facts about them;

March born people love to be appreciated. Though they may not say it, they secretly crave for acceptance. And once they get it, they will reciprocate by being good.

If anyone shows an act of kindness towards them, they will make sure to return the favor. They like it when people are good and just to one another. They love to be treated nicely.

People born in March are affectionate souls. They show love and care to everyone who deserves it. They are the most understanding types of people. They are in accordance with whatever goes on in the lives of others.

March borns are very compassionate too. They spend their time with people who are important to them. They are always ready to serve others for as long as will be appreciated.

People who are born in the month of March are born with awesome traits that benefit everyone around them. Their kindness helps them win the attention of people.They are sure to get noticed because of their good deeds.

March borns will be eager to participate in voluntary activities. They are happy to volunteer provided they would be able to help others.

March children are highly instinctive. Their guts seem to tell them a lot of secrets. They are the types that just know. They cannot be cheated or swindled.

It is impossible to deceive a March born, for their intuition will let the cat out of the bag. They can also sense any form of diabolical scheme around them. They are driven by their killer instincts.

March born people seek to be noticed. They love it when people are aware of their presence. They will make sure to do things that paint a good image of them so people will admire and adore them.

March borns may even blow their trumpet for this cause. They hate being invisible and will do anything to be seen. They love when people acknowledge their personality.

March borns are quietly attractive. They don’t blow horns about how pretty they are but, they sure are good-looking people. Their attitude towards others is mostly wonderful.

They portray great parts of themselves to others. They let their friends know what happens on daily basis and will be glad to let someone take a sneak peek into their world.

People who are born in the month of March can adapt to various conditions. They are known to survive when things go downhill. They will push through despite their present situation.

March born people are very understanding. They understand every single bit of a person’s predicament. Their ability to adapt to any kind of lifestyle is a very powerful trait that is associated with March borns.

March born people are likely to be found in serene environments. They love to stay alone and enjoy solitary peace. They tend to stay away from noisy and crowded places. They enjoy peace and quiet.

March borns often spend time with their thoughts. They are creative people who sit and think up great ideas. They do this by moving away from all forms of distraction.

People who are born in March are lively and social. They know what it takes to be liked by everyone and they do it. They are loved wherever they are found.

March borns may also be surprised at the number of people who want to make friends with them. Little do they know that it’s a natural trait which draws people closer.

March born people can be trusted. They are honest people who believe in being plain. They speak the truth and are just in their actions.

March borns are individuals who can be entrusted with valuables. They believe in doing what is right and will not attempt to steal, defraud or even tarnish their image in any manner.

People who are born in March also have a negative side. Below are some;

At some points, March borns can become shy and reserved. They sometimes spend too much time alone and this may make them feel uncomfortable with other people.

March borns may not be too open about themselves. They tend to keep a shut mouth because they feel they may not be as interesting as other people are.

In relationships, March borns may have more than one partner at a time. They want so many things from their relationship and may end up getting them from additional partners.

Anyone who may find themselves with March borns should be aware of this. Their love lives are pretty complicated. But it will be great if they have a partner who they can relate with very well.

March born people may be prone to addiction. They have a soft heart and so they be easily influenced by people. Out of their need to feel among, they may be caught up with the wrong set of people.

It is best for a March baby to be trained and educated so as not to fall astray. They ought to be watched and properly taken care of.

March borns do know how to hold grudges. Once offended, it may take a lot of years before they get it off their mind. They keep their anger within and can nurse ill feelings towards someone for a long time.

They hold grudges and would react negatively to anyone who they are in conflict with. Sometimes they may choose not to forgive one who hurts them.

March borns can be really revengeful. This is as a result of the fact that they do not forgive easily. They are the types that find it difficult to let go.

March borns may stop at nothing to retaliate against someone who gets on their nerves. They tend to inflict pain and hurt on anyone who might have done such to them. While they are young, it’s best to be taught how to forgive and let go.

People who are born in March are sensitive. They do not show it and that’s why it isn’t obvious. They tend to not let anyone into the deeper part of themselves.

March borns are sensitive to everything that goes on around them. They have a stylish way of knowing where problems lie. They are silently attentive to their environment.

March borns tend to get angry easily. They may flare up at almost any little thing. This doesn’t happen every time but, at some point when they are in a very bad mood.

March born people may also get angry when their quiet time is interrupted by anyone. They love to maintain focus and would not take it easy with distractions.

People who are born in March have the tendency to become moody and secretive. They do not talk to most people. When something goes wrong, they may keep it to themselves and refuse to let anyone hear about it.

They may become moody for no reason at all. It may be as a result of not being given the freedom to explore the world.

March born people are sure to hide a lot of things from people who care about them the most. They do this especially if they have been talked down before.

If any of their previous revelations may have warranted condemnations from the people they confided in, they would prefer to bottle every of their feelings inside them.

March born people may become vulnerable in relationships. Their numerous expectations may lead them into the hands of the wrong person.

Sometimes they may find it hard to define who their ideal partner is. It’s best for them to use their discretion and to carefully decide who they want to go into a relationship with.