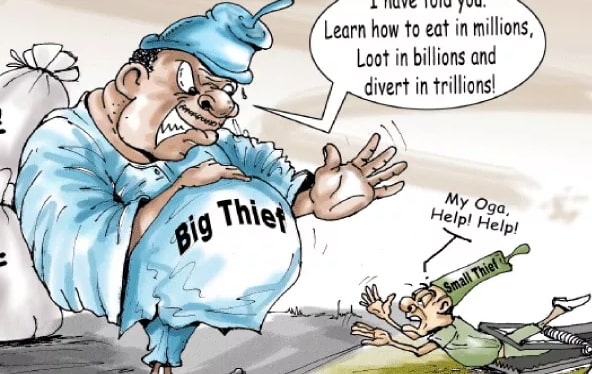 What could be wrong in wishing that the Nigerian ruling class experiences the catastrophe it inflicts on the citizenry via bad governance?.

Consider for instance, the sad case of a man who loses his wife and three children to a fatal road accident caused by bad road; knowing that his state governor had persistently ignored pleas that he repaired the badly cratered road, could it be wrong for the bereaved to pray, that our Heavenly Creator, rewards the governor with similar tragedy?.

Would it be wrong to pray that divinely inspired vengeance, scorn all religious, anti-retributive rites by the governor, and wreak greater havoc in his life?

How about the poor, helpless under-age girls abducted from Baga, Bama, Konduga and other parts of Borno State? If such girls – the survivors among them to be precise – eventually understand that they were labelled disposable integers, the casualties of dirty politics and a war of wiles by the political class, would it be wrong that they wished upon the men and women responsible for their plight, greater tragedies, in retribution?.

Maryam Alhaji-Wakil was abducted at the tender age of nine. In 2014, insurgents of the deadly terrorist sect, Boko Haram, invaded her town and burnt her home. They killed her relatives and decapitated her neighbours. Then they whisked her off to Sambisa Forest.

There, she was forcibly married to Modu, a lustful and violent Boko Haram insurgent. In two days, little Maryam was violently thrust into womanhood. Modu, 35, forced his way into her unripe orifice, robbing her of innocence and the mystic pleasure of first and legitimate adult sexual experience.

Modu was hasty and rough thus making her ‘first time’ bestial and replete with pain. Maryam screamed in agony but Modu didn’t care.

“The louder I screamed, the more violently he shoved into me until I passed out,” she revealed to me in a personal encounter.

Thus at the tender age of nine, Maryam was violently abused. When she could not withstand the misery of living as Modu’s sex slave any longer, she volunteered to serve as one of Boko Haram’s suicide bombers.

Consequently, she was dispatched with a bomb to neighbouring Cameroon. She was taken on a motorcycle to blow up soft military targets in the country but Maryam had other plans.

When the rider dropped her, she approached the soldiers and told them, ‘I have this thing on my body. It is a bomb. I was sent to kill you. Please, help me remove it.” Instantly, the soldiers sprung into defensive position but when they realised that she had come to surrender, they approached her and unstrapped the explosive from her body.

Maryam spent several months in the custody of the Cameroonian gendarmes until she was handed over to the Nigerian Army. Hard as it is to picture the extent of bitterness devastating her heart, an intense gape into her eyes reveals a girl utterly torn apart. Beneath her pretty face lurks a battered soul.

Now 12 years of age, Maryam is yet to break out the jailhouse of her past. She is still that abducted, frightened nine-year-old, who got whisked off to Sambisa Forest, after watching her relatives and neighbours fall in a bloody heap, to the bullets of Boko Haram’s terror squads.

Maryam relives the days she went without food because her insurgent ‘husband’ was too lazy and poor to feed her. She remembers the excruciating nights that she laid captive and helpless under Modu’s massive bulk, while he violently plowed into her because she “was an unwilling bride.”

When Maryam eventually discovers that the men and women, fathers and mothers, who were meant to ‘protect and serve her’ as all good leaders should, were responsible for her misery, should she simply ‘forgive and forget?’ When she discovers that they embezzled the £2.1 billion disbursed to procure weaponry meant to secure her release, should she seek them out for a hug?

It is only just that Maryam utters, persistently, heartfelt prayers, that the Most High God, blesses the daughters and granddaughters of the men and women who triggered and accentuated her misery, with similar fate.

Some would claim, that, it is wrong to wish such retribution on ‘innocent children’ of the predatory ruling class. They would counsel forgiveness saying: “Let the actual offenders be punished and not their bloodline.”

Why? In a nation where rich, privileged criminals are given a slap on the hand and pat on the back, it is only just that the progeny and wives of such characters suffer same tragedies as victims of their inhumanity.

After all, prosecutors have established that certain governors, senators, presidents and bank chiefs plundered Nigeria’s treasury with the assistance of their wives and children. Just recently, the anti-graft agency confiscated 20 expensive automobiles from the unemployed son of a military chief, who is under inquiry for corruption.

If Nigeria’s leadership is just to the citizenry, the universe will in turn, be just to them. However, public officers responsible for the incessant disasters plaguing Nigeria, should get their just deserts even as you read. State governors and senators for instance, may remain rich, privileged and aloof, while electorate families perish on bad roads and rural kids die for lack of adequate care across Nigeria’s primary healthcare centres; very soon, they will watch their children and grandchildren suffer the same fate.

Such is the working of divinely ordained retribution – I only give voice to the immutable.

If as a president, state governor or legislator, you embezzle public fund and divert it to sponsor your children’s education overseas while the children of peasants and working class who voted you into power, extinguish in intellect and passion, across Nigeria’s underfunded schools, it is only just that those children of yours never amount to much or anything in life, like the victims of your greed.

Sanctimonious faithful and intellectuals may condemn this because it is ‘religiously and politically incorrect.’ They would claim only the offenders deserve to get punished. Where the offenders are caught, they would suggest plea bargain, and urge that they get pardoned, in the spirit of godliness.

To this, I say: ‘What crime did Maryam and her parents commit?”.