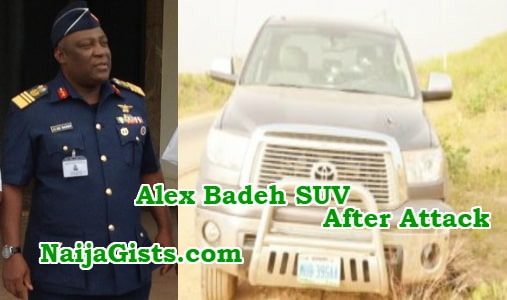 More details have emerged on the brutal murder of Air Chief Marshal Alex Badeh who was shot dead by some gunmen on Tuesday night.

According to eyewitnesses, the former Chief of Defense Staff was in his Toyota Tundra truck with registration number MUB 396 AA when he was shot by some unknown gunmen at a location in Gitata community on Keffi-Bade road, Nasarawa State.

Some Gitata residents said the deceased was coming from his farm between Koso and Kugwaru communities when he was shot. They said though Mararaba was closer to the farm, the dilapidation of the road made the choice of Panda road off the Keffi-Bade highway better.

The truck windscreen was pierced by bullets, its windows shattered, its bonnet ridden with bullets. The front tyre of the passenger side was blown out. The layout of the scene was consistent with the style of operation of gunmen who regularly attack travellers in the area, according to what residents told Daily Trust at the scene.

Witnesses to the incident never knew it was Bade in the vehicle at the time of the attack until the Air Force announced his death. They described him as seated in front beside the driver, and describe him being shot in the trunk.

Patches of blood still stained the truck’s cup holder and armrest between both seats as seen by Daily Trust.

One witness, Idris Musa, a driver, said the incident happened at about 6:45pm on Tuesday. Musa who spoke in Hausa said he was driving to Gitata from Keffi when some drivers stopped him at Unguwar Mangoro where he was informed about an on-going robbery on the road.

Musa said he parked his vehicle by the roadside while looking out for oncoming vehicles near the bush when he saw a vehicle ran into the robbers.

“This very man was coming with his car, Tundra, when he now switched on his head light. Then they started shooting at his car,” he said, adding that he counted about 10 gunshots before he fled into the bush in fear until he was called out by his colleagues after the gunmen left through the bush. 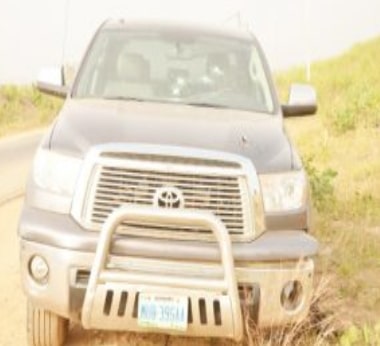 “When they went there, they saw the driver injured on the arm and another man already dead in the car. He was shot in the stomach,” he said through an interpreter.

He said the soldiers wrapped a bandage around the injured driver’s arm.

“This is the third time in this month that something like this happens, two people have been killed and one kidnapped this month,” he said, adding that he never knew the dead man he saw was a former top security chief.

The witness also said the deceased former chief of defence staff was shot few minutes from Zango Gitata, a community sandwiched between two military checkpoints. The Shitu Alao Barracks is also on the Keffi-Bade road.

However, a trader in Gitata, Joshua Ade, said before the two checkpoints were mounted, the gunmen could operate about three times in a day.

“At times they come out three times in a day. We thank God because of the soldiers at the checkpoints. Then we do hear gunshots from here,” he said.

Ade said he was at his makeshift shop where he sells car spare parts when he saw the Tundra go by on the road on Tuesday. Few minutes later, soldiers at the Gitata checkpoints were seen speeding in opposite direction.

Ade said by then he knew something was going on and was not surprised when he later heard that a man was killed by some gunmen before the soldiers got there.

“It was this morning (Wednesday) that I got to know that the man was prominent. This month it is up to two times, two weeks ago they operated and kidnapped about six people,” he said.

“It has been happening before; it is because of this man that died which I think is an elderly person or top government official that everyone is hearing it,” he said,.

There has been heavy deployment of security personnel since Tuesday night.

“Since last night soldiers are going up and down. They mount road blocks down there and about 10 of their vehicles have been patrolling the area,” he said.

He said the gunmen usually waylay motorists at a sharp bend after Zango Gitata.

Abdul Gitata was attacked thrice at a sharp bend and once shot at by the gunmen whom he said were usually dressed in military uniforms.

“The last time that I entered them, almost two months, they shot at my car and broke three of my tyres. They usually lie down in the bush and just start shooting at the car, when you stop they will kidnap people and go.

“That place is a bush, no houses there and there is a bending corner. Normally if you hear any armed robbery incident, it is that place. When you are coming from Keffi, your mind won’t rest until you cross the place. They operate even in the day,” he said.

He said the security operatives on the road tried in curtailing the situation but the gunmen usually operate after they soldiers have finished their patrol of the area.

“They (gunmen) used to have information when security are patrolling you won’t see them but when soldiers are gone they now operate,” he said.

The Mai Martaba Sarkin of Gitata, Turaki Danlami Rabo said he was not authorised to comment on the security situation in the community.