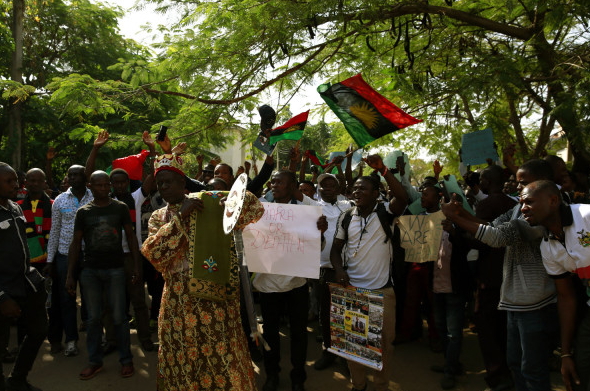 Nov 14, 2017 – IPOB Remains A Terrorist Group Until Application To Void Proscription Is Reviewed Next Year

The Federal High Court, Abuja, has fixed Jan. 17, 2018 to rule on an application seeking to vacate an order of the court which proscribed the Indigenous People of Biafra (IPOB), describing it as a terrorist group.

The Acting Chief Judge of the Federal High Court, Justice Abdul Kafarati, fixed the date to give his ruling after taking arguments from counsel.

Arguing on behalf of the Federal Government, Mr Dayo Apata, the Solicitor-General of the Federation and Permanent Secretary, Ministry of Justice, urged the court to dismiss the application.

Apata based his argument on the grounds that the activities of IPOB were such that no sane government would over look it.

“The problem of Rwanda started with some people calling others cockroaches, and here is a group calling Nigeria a zoo, should the government wait and allow things to get out of hand before taking an action?”

Counsel to IPOB, Mr Ifeanyi Ejiofor, on his part, prayed the court to vacate the order on the grounds that the order was granted in error.

“The order was granted in error and fundamentally, we also discovered that the approval, as provided under Section 21 of the Terrorism Prevention Act, to be granted by the President of the country was not given in the first place.

“So by the virtue of the fact that the approval which was purportedly granted by the President was signed by the Chief of Staff, it has rendered that process invalid and an order emanating therefrom should be null and void,” Ejiofor said.

According to Ejiofor, the process for securing the order is fundamentally defective in law and the order should be vacated.

On the argument by the government that IPOB imported illegal arms into Nigeria, Ejiofor said that there was no place in the documents front loaded before the court that linked his client to the arms.

NAN reports that the Federal High Court had on Sept. 20, granted an order declaring IPOB as a terrorist organisation.

The order which was sequel to an ex-parte motion filed by the Attorney-General of the Federation, Mr Abubakar Malami, also proscribed the existence of IPOB throughout Nigeria.

IPOB, through its counsel, filed an application challenging the order obtained by the government and also asked the court to quash the order.