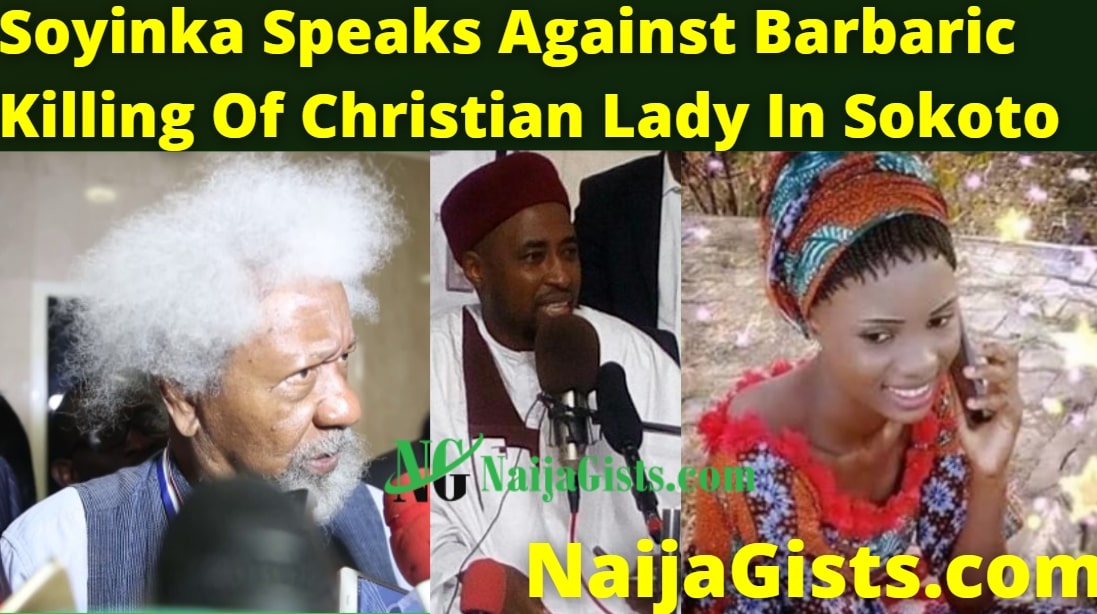 Nigerian Nobel laureate, Wole Soyinka, has come after Professor Ibrahim Maqari Yakub, the Chief Imam of Abuja National Mosque who justified the killing of Deborah Samuel in Sokoto for alleged blasphemy against Islam.

Speaking last night at the one-year remembrance of the late former Chief of Army Staff, Lt.-Gen. Ibrahim Attahiru, organised by his Foundation, Soyinka accused the Islamic cleric of directing his followers to take the law into their hands in the name of religion with his statement.

He lamented the resort to lynching people in the name of religion, calling for the end to such barbaric acts in the country.

Here is what the Nobel Laurate said;

“We have already continued to pay a too high a price for the culture of appeasement and impunity. Let it end now in the name of all those who have served this nation and given their lives for this nation.

‘’But the new generation should also be programmed to aspire to brutish existence below the lowest common denominator of what constitutes human. Surely, that is where any self-respecting nation to draw is defining unbridgeable line’’

“In the name of all, while I’ve given all for all, I demand that Professor Ibrahim Maqari shall be removed from office. It is no longer sufficient for all to claim that Islam is this and that.

“Maqari has implicitly directed his followers to take the law into their own hands in the name of religion, and innovation, besides being beset on all sides by wars, ultra-nationalism, or religious fanaticism.

“That is the message of a supposedly holy man to the youth, to us. His message to a nation embroiled in this madness of multiple incidences.

“We’ve gone beyond theocratic rhetoric that merely pays lip service to civilized conduct, that all artistic denunciations be backed by affirmative action.

“We have already, and continue to pay too high a price for the culture of appeasement and impunity.

“But the new generation should also be programmed not to aspire to brutish existence below the lowest common denominator of what constitutes humanity.

“Surely, that is where any self-respecting nation should strive to draw a defining unbridgeable line.

“Professor Maqari however, insists, with a handful of others including vocal serving policemen quite recently, that there is no remorse involved in the torture and lynching of a young student on this earth, which we all share to anyone who cares to listen.”

In her remarks, Hajia Aisha El-Rufai, wife of the Kaduna State governor, said Islam condemned killings in the name of the Prophet

Dismissing reports that those killing people in the name of ‘blasphemy’ were doing so because of Islam, Hajia El Rufai said;