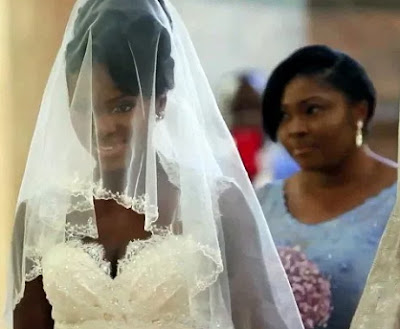 Feb 20, 2018 – Islam Does Not Permit A Woman To Sponsor Her Own Wedding No Matter How Rich She May Be – Cleric

Different opinions have continued to trail the submissions that ladies with larger purses than their would-be spouses can sponsor their weddings.

Some Lagosians who spoke to NAN in separate interviews today in Lagos supported women who wanted to sponsor such while others disagreed.

Mrs Ifeyinwa Ojiego, a businesswoman told NAN that before she would embark on such ventures, she must have observed that her man would appreciate the gesture.

Ojiego said that some men would do anything within their reach to nurture their relationship irrespective of their financial status before and after wedding.

“ If I ascertain that my fiancée is not promiscuous and that after all said and done, I will have a peaceful marriage, why not?

“ I will gladly sponsor the wedding because it is for our mutual benefits,” she said.

Miss Stella Dipeolu, a corps member, told NAN that she would love to sponsor her wedding in a situation where she was earning more than her man.

She, however, said that the man might misinterpret her intentions if there were no understandings between them.

“Men are egoistic in nature; nothing should be done to threaten his ego. So, I will prefer he sponsors the wedding.

“If he is really serious and truly loves me, I will be patient with him to work and save enough money to sponsor our wedding,” she said.

Mr Olarotimi Azeez, a poultry farmer, told NAN that it was a taboo for a woman to sponsor her wedding.

Azeez said that no matter how bad the situation was, he would marry his wife with whatever he could afford except the lady was not interested in answering his name.

“I am the man and l will marry my wife with whatever l have. If she is not pleased with the little l have, then she can call it quit.

“For a woman to sponsor my wedding will be a taboo; and let me tell you, my late mother will rise in her grave and beat the hell out me.

“The woman and her family should accept me the way l am and with the little l have for the wedding.

“ If she or her family is not pleased, then l will not go ahead with the wedding,’’ he said.

Mrs Lydia Oko, a French instructor, told NAN that she could support her man from her means to ensure a successful traditional engagement.

Oko said that expenses on traditional marriage rites were usually very expensive in the South-East part of the country.

“I am from the South-East part of the country where traditional marriage rite is a major event.

“The lists from the bride’s family given to the bridegroom’s family are usually long and if the husband- to-be is not financially buoyant, he may back out,’’ she said.

Miss Sharon Kajola, a horticulturist at Apapa, told NAN that the success of a marriage would be determined by how united and cooperative the two partners were.

Kajola said that some partners were getting it wrong from the planning stage.

She said that misunderstanding might ensue from the point of planning between partners because of differences in individual choices.

She said that in such a situation, if the lady decided to sponsor the wedding, it might not be appreciated.

She said that it was the responsibility of both parties to sponsor their wedding but the man should play the major role.

Kajola said that when there were mutual understandings from both parties, there would be no rancour.

According to her, when a man is allowed to go without spending a dime during the wedding, he will not value the lady.

“I want a man that will value me as long as my marriage lasts; any man who gets a wife on a platter of gold will not value her.

“Therefore, I will not consent to sponsoring my wedding without the input of my partner,” she said.

Malam Yunusa Mahmud, a Muslim cleric, told NAN that Islam does not permit a woman to sponsor her own wedding no matter how rich she might be.

Mahmud said that the man would rather be allowed to pay his wife’s dowry according to his financial capability.

He said that if the man was extremely poor, the woman could ask him to recite a portion of the Quran for her as the dowry in the presence of her family.

“It is not important to have an elaborate and extravagant event. It can be a parlour wedding because that is what the man can afford.

“Islam permits couples not to task themselves beyond their limit. Let the woman know that what matters most is love and understanding,’’ he said.

A clergy, Pastor Oladejo Olanrewaju, said Christians must learn to cut their coat according to their cloths when it comes to wedding.

He said that no matter how rich a lady should be, she should allow her partner to pay his dues when it comes to fulfilling all the marriage rites.

“The bible says that whoever finds a wife finds a good material and shall obtain favour from the Lord.

“Let the lady support him to ensure that they both start on a solid foundation based on the teachings of Jesus Christ and not on how rich the woman is.

“Be a virtuous woman, give your partner the respect he deserves, be satisfied with the little the man can afford, do not push him beyond his limit.

“ Join hands with him to build your home and enjoy peace thereafter’’, Olanrewaju said.

In the same vein, Mrs Wunmi Alfred, a businesswoman said that it was an abomination for a lady to sponsor her wedding.

Alfred said that such ladies would only be giving room for problems in their homes.

“I believe the man should always be the head, so when a man is financially incapacitated to sponsor his own wedding, there is a problem.

“To me, any man without money to plan his wedding will not have the capacity to take care of his home.

“If the woman sponsors the wedding; what about sustaining the marriage, will she also do that?

“Sustaining the marriage is more important and the man must work hard to make money and do the needful,” she said.

I Think My Fiancee Is A Lesbian, She Keeps Sending Nude Photos To Her Girlfriend
My Wife Slaps & Hit Me Anytime I Cautions Her – Divorce Seeking Husband Tells Court
Advertisement