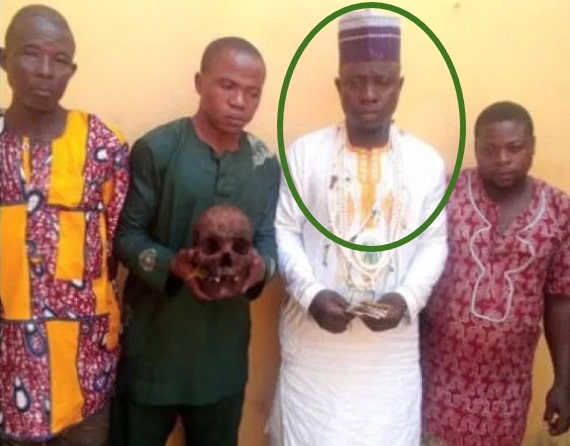 A 35-year-old Islamic cleric, Jamiu Olasheu and 3 others have been arrested for unlawful possession of a human skull.

According to police investigation, a police patrol team from the Agbara Division, which was on routine crime prevention patrol of the area, accosted two men on a motorcycle at the Kofedoti area of Agbara.

When the men, Teslim Ayeniromo, 45, and Sunday Kolade, 35, were searched, a human skull was discovered in a sack found with them.

Oyeyemi said upon interrogation, the suspects claimed that the human skull was given to them by one Michael Osanyinbi, 51, for onward delivery to the Islamic cleric.

The suspects led the DPO to the house of the man, who reportedly gave them the skull, and he, in turn, led the police to the cleric.

“The cleric has made a confessional statement that he actually requested the skull, which Michael Osanyinbi promised to get for him at the rate of N25,000 plus N1,000 for the motorcyclist, who would deliver it to him. He stated further that the skull was needed for a yet-to-be-disclosed ritual.”