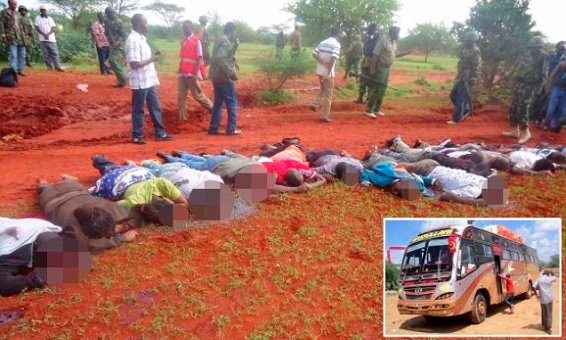 On Saturday morning, 28 Christians travelling for Christmas met with untimely death after the luxury bus taking them got ambushed by Muslim extremists.

The fully-loaded bus travelling to Nairobi from a town in Somalia was stopped as it was about approaching Kenya by Somalia-based Shebab militants.

According to the Muslim passengers who escaped the attack, the Islamists separated them from the Christians and asked them to recite Quranic verses.

They then ordered all of them to get off the bus, killing the Christians who couldn’t recite the quran.

Shebab leader said the travellers were murdered as a result of a recent attack on mosques in Mombasa Kenya.

These terrorists are cowards.

May the souls of the murdered saints rest in peace.