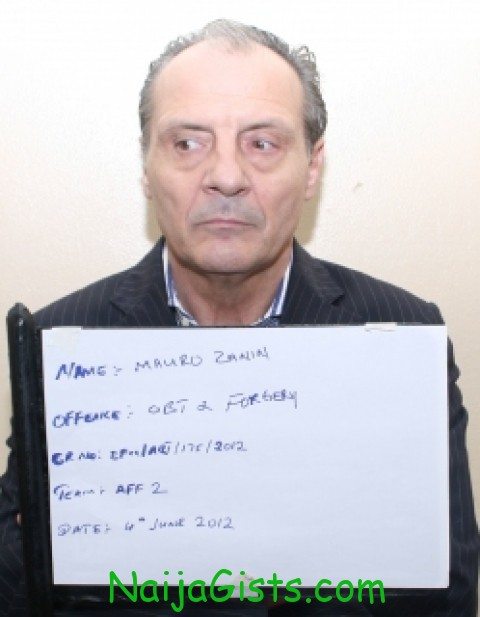 Mauro Zanin was found motionless in the bathroom of the Commission’s detention facility in Abuja at about 4.50 am on June 19, 2012.

“He had apparently committed suicide using his bedsheets”, said EFCC in a press release signed by Wilson Uwajaren, its spokesperson.

“All effort by the duty officers and a team of EFCC medical personnel led by Dr. Gideon Osi of the Commission’s Medical Unit to revive him with cardio-pulmonary resuscitation proved futile.

“He was subsequently certified dead at about 5.45 am.

“Though all clues point to suicide, the incident has been reported to the Nigeria Police Station, Maitama for investigation”, the Commission further explained.

The anti graft agency said the deceased was arrested by Officers of the Nigerian Immigration Service following a complaint by one Ahamefula Chibuzor Ewuzie that he fraudulently obtained the sum of $111,000 from Gladwaters Nigeria Limited. The case was transferred to the Commission on 30 May, 2012 for further investigation.

The Commission had filed a five count charge against him in court and got a Wednesday 20 June date for hearing date.

He was served the court papers to prepare his defence yesterday.

“His arrest was officially communicated to the Italian Embassy on 31 May, 2012. The same day, the suspect was granted provisional bail, but he could not get a surety to take him on bail.

While in detention, Mr. Zanin was visited on 30 May 2012, by Mr. Nicola Bazzani, First Secretary and Deputy Head of Mission at the Italian Embassy; and everyday by his lawyer, Mr.Ugochukwu Onyejiuto.

“ It is important to say that I took this matter pro bono, with the hope that he will pay my fees when he is free.

“I was spending my money feeding him… to my amazement; he refused to let his family know what was going on. He has a 30 year-old son who is a lawyer in Italy but he was always telling them all was well”, EFFC quoted Onyejiuto as saying.

“Zanin took his own life a day to his scheduled arraignment.

EFCC also quoted Dr. Mma Wokocha, the complainant as expressing shock at the news of the death of the suspect, wondering how she would recover the huge sum of money obtained from her by the deceased.

“However, she absolved the Commission of any blame in the death of the suspect. ”Nobody should blame the EFCC.

“The Commission has done what it has to do, you cannot blame the EFCC…there was total human care for this guy,” she said.

EFCC alleged that the deceased obtained the money from Wokocha under the guise of selling used Dredger Italgraghe SGT 200 to them, to execute some dredging contracts in the Niger Delta.

The suspect sent them a Bill of Laden but their long wait for the ship, MSC Trinidad to berth was futile.

Unknown to the complainant the Bill of Laden was forged as the ship indicated had ceased to exist long before they ever met the deceased three years ago.

The remains of the suspect have been deposited at the mortuary awaiting an autopsy.