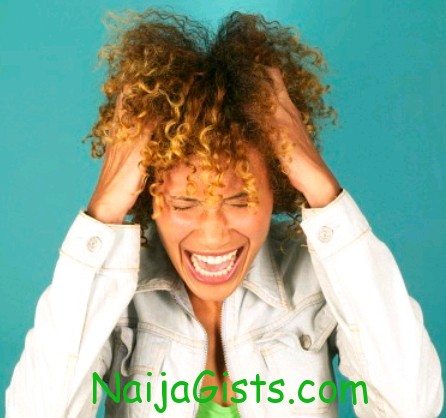 In order to prevent her husband from further looking outside for sexual satisfaction, a woman has done the unthinkable by pouring hot water on his penis. naijagists.com

The jealous housewife, Nike Fasoyinu, unleashed her anger on her husband, Amos, after suspecting that he was sleeping with other women.

Her husband was seriously injured  and was rushed to a hospital where he is being treated.

The woman was arrested after the incident which happened at their residence at 34, Olaolu Omotosho street, Egan, on the outskirts of Lagos State, Southwest Nigeria.

Apart from his penis, other parts of his body were seriously scalded.

The mother of two kids reportedly justified her action by saying that she suspected that her husband was sleeping around with other women.

According to Pm report, the woman had earlier had a serious  fight over the same issue with the victim she has been married to for five years.

The offence the police prosecutor said she committed was contray to section 244 of the Criminal Code law of Lagos State of Nigeria 2011.

The 27-year old woman has been arraigned before Ejigbo Magistrate’s court, Lagos. She pleaded not guilty.

The presiding Magistrate, Mrs M. B. Folami granted her bail in the sum of N100, 000 with two sureties in like sum.

The matter was adjourned till a further date.