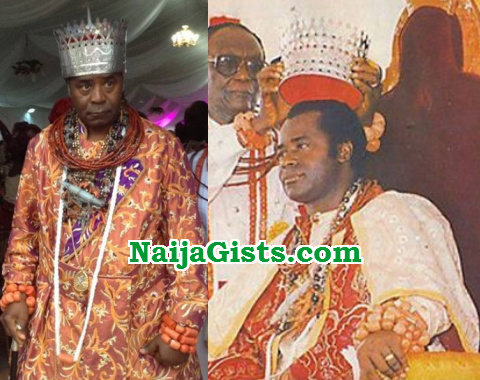 Warri Traditional Council of Chiefs officially announced the demise of Olu of Warri, Ogiame Atuwase 11 on Saturday, which laid to rest the controversy surrounding the death of the monarch.

He also announced Mr Godfrey Emiko as the Olu-designate, which was accompanied by wide ovation from the Itsekiri sons and daughters present at the event.
Before the announcement, a chalk wrapped with red and black clothes was smashed on the ground three times to symbolise the demise of the monarch, and it was accompanied by 17 cannons shots.

The influential Itsekiri King, who reigned for 28 years, was reported to have died in a private hospital on September 5 in Lagos.
The septuagenarian’s death threw anxiety among the people after the chiefs kept mum over the state of health of the monarch.

Addressing newsmen, Pessu said the Itsekiri people would be in a mourning mood in the next three months till the burial rite was concluded.
“All Itsekiri adults both male and female will put their clothes inside out throughout this period of mourning.
“No party, no drumming or merriment of any sort in Itsekiri land, until the burial is over and new Olu installed,” he said. 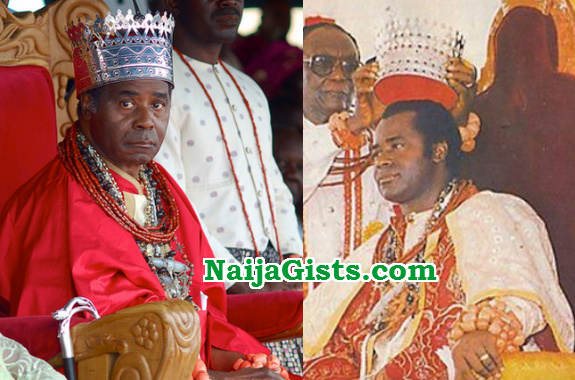 Also Prof. Jim Omatseye said the choice of the Olu designate would usher in peace and security into the Itsekiri land.

“The Olu designate will be in seclusion in the next 90 days to receive advice from elders in the kingdom.
“This is a training period for him where he will be exposed to a lot of cultural activities,” he said.
Omatseye, who described Emiko as articulate and intelligent man, said his choice was widely accepted by the Itsekiri people including himself.

“We know him over the years, he is intelligent, intellectually minded, graduate and culturally exposed,” he said.
On why the son of Atuwase 11 did not succeed his father, Omatseye said the Itsekiri was governed by law.
According to him, the son of a departed monarch could only succeed throne when his mother was either from Itsekiri or Benin.

“If the son of a departed monarch is not qualified by law, it is the prerogative of the princes to choose from the ruling lineage of Ginuwa, Erejuwa and Atuwase,” he said.
Mr Thomas Ereyitomi, a senior chief, said the event was to clarify the rumour in circulation over the health situation of the monarch.

“The Itsekiri nation has let the whole World know that we have lost our Olu and the introduction of his successor.
“There was no disagreement among us but it is just a process and tradition we needed to follow,” he said.
Ereyitomi urged the Itsekiri to console one another, especially this mourning period, and also work together for the smooth succession of the new Olu.

Mr Joseph Otumara, the immediate past commissioner of health in Delta said the event signified the end of an era and beginning of a new one.
He also urged the Itsekiri people to abide by the advised given by the chiefs throughout the mourning period.

“He is a graduate of Business Administration from the University of Benin, a successful businessman but non partisan,” he said.

Continue Reading
You may also like...
Related Topics:clothes, inside out, itsekiri, men, mourn, olu warri, women